Three years into the crisis we can say that the world did not come to an end, the economy did not fly off the cliff and markets are operating in "safe" mode.  Not to mention that Wall Street is smugly preparing to pay huge bonuses once again.  Credit must go to the Fed and Mr. Bernanke personally for making so much, well, credit available to everyone who asked for it and even to some who didn't.
But is it, in fact, credit that we must give the Fed?
During the past three years the Federal Reserve has assumed a role never envisaged by its founders or anyone who ever worked there - Mr. Greenspan included, I'm sure.  Despite his "heli-Ben" moniker, I even doubt if Mr. Bernanke himself ever truly believed that the Fed would have to go as far as it has under his guidance.
Because it's one thing for the Fed to respond to challenging economic conditions by lowering interest rates down to ZIRP.  But it's quite another, a quantum leap (of faith?), to become the major shaping force of the economy by inundating it with so much money as to reverse the natural ebb and flow of capitalism, to forestall what Joseph Schumpeter called creative destruction.
They say that the road to hell is paved with good intentions, and I am afraid that we have all of us allowed Mr. Bernanke to lead us a merry journey that may end in a very hot place, indeed.  He has good intentions, undoubtedly: to "save us" from a financial meltdown which could have resulted in another Great Depression.  He has used monetary policy to an incredible extent, encouraged, it must be admitted, by an executive branch that was so intertwined with Wall Street as to be practically indistinguishable.

So, monetary and fiscal policy both opened up fire on the Great Recession using the only big guns they could bring to bear: money and government borrowing /spending.  They fired so many rounds of such heavy gauge that the "enemy" was stunned and is - at the moment - still dizzy from all the noise and smoke.

But the enemy is definitely not dead, because money-for-nothing and government spending are to him as effective as flash-bang grenades.  Lots of smoke, lots of noise - but no damage.

Massive debt is, therefore, but the proximate cause of the crisis.  It's actually a resulting effect of the ultimate cause, which is high income disparity (see chart below). 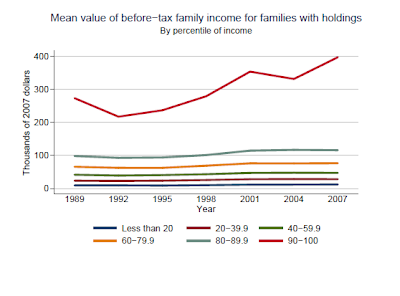 Chart: FRB Survey of Consumer Finances
Obviously, easier credit (more debt) and government deficit spending (even more debt) do nothing to solve the income inequality problem, which can be summarized thus: lower and middle income people spend a far greater percentage of their income than the rich, who amass wealth instead. Therefore, it is imperative for the former to have growing income to maintain their spending out of earnings and keep the economy healthy.

The obvious solution, most will say, is as as old as Robin Hood: take from the rich and give to the poor.  Really?  While the egregious favoritism shown to the rich in previous tax laws must definitely be rolled back, taxation alone cannot do the job of repairing decades of yawning income inequalities.  Instead, we should pay great attention to the most fundamental economic concept of all: adding value through peoples' work.

What I am trying to say is that real incremental wealth, and the social "fairness" that results from its more equitable distribution, cannot come about from re-distribution, but only from the creation of new useful real assets that generate added value for society at large.  For example, an upgraded electric grid that reduces losses and permits two-way power flow;  such an "asset" can be put to work immediately and will generate profits (added value) for all, i.e. it's useful to the vast majority of people.  Its design, construction and maintenance will create tens, even hundreds of thousands of new, skilled jobs that will command high wages, precisely because of the grid's profitability.  That's how income gaps get smaller (think Ford, Model T, etc.).

Contrast this with trading CDS's.  While there is a small theoretical benefit to society at large from such an activity (I could argue that it's actually a cost, but that's another discussion), the benefits that accrue are not real but purely actuarial or monetary, i.e. virtual.  Furthermore, because of the nature of the financial industry itself, those benefits end up in the hands of a tiny part of the population which is already super-rich.

In conclusion: we have reached, nay surpassed, the limits of monetary and fiscal policy in dealing with this Great Recession.  What we urgently need now is -gasp- an Industrial Policy.  Yes, that's making real things for real people (tm).

P.S.  There is at least one guy who "gets it".  Robert Reich was Labor Secretary under Bill Clinton and has just come out with a book about exactly this matter.  Aftershock: The Next Economy and America's Future is well written, well argued, brief and to the point.  It also includes several workable ideas on how to close the income gap.