Three years ago I was shaking my head at the yen carry trade (As The Yen Strengthens).  Today's decision by the Bank of Japan to formally ZIRP (Zero Interest Rate Policy) itself into a corner, to - as it hopes - stop the yen from strengthening further, underscores how far the yen carry has unraveled since then.

This so-called "strategy" of borrowing yen at low interest rates to speculate in financial markets all over the world was one of the major generators of hot money and, thus, a big enabler of the bubble finance that ended up as The Crisis.

In August 2007 I estimated the size of yen-carry money at around $1 trillion, based on data from the Bank of International Settlements (BIS).  The updated chart below shows what has happened since then - I call it the rise and fall of the yen carry trade and it largely confirms my initial estimate of $1 trillion.  Notice how nominal amounts of yen FX swaps and forwards spiked upwards by about $1 trillion at the top of the bubble folly, only to come down by the same amount as soon as the bubble burst. 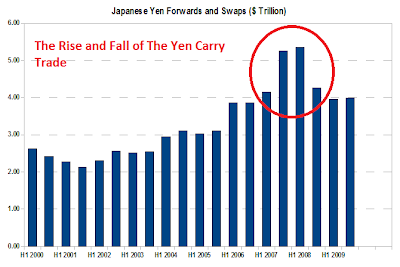 Data: BIS
I thought the yen carry trade to be so risky as to be downright foolish, at the time.  It made no sense to assume very high currency risk (the yen was at multi-year lows) in order to place highly leveraged bets on instruments providing very small spreads over Treasuries and over borrowing costs.  One example was buying second-tier European debt (e.g. Greek government bonds) at minuscule spreads of 50 basis points over bunds.  What followed is history, and it is still unfolding.
But now is now, and if I was a betting man - which of course I am, being in this business - I would be quite interested in putting on some new yen carry trades at this juncture.
For the record,
Posted by Hellasious at Tuesday, October 05, 2010