Are credit default swaps (CDS) legitimate hedging tools or just another way to bet the ponies?
I was there at the beginning, so I know that CDSs were originally designed to hedge or reduce credit exposure.  It was a highly specialized, custom-made and low-volume business stuck in quiet corners of trading floors, away from the glamorous hot spots of foreign exchange, money markets, derivatives and bond trading.  With trade documentation going back and forth, individual trades frequently took days to complete.

It was slow going for several years - and then everything changed. From a very modest $630 billion notional outstanding in the first half of 2001, CDSs exploded a hundredfold to $62 trillion at the end of 2007 (see chart below). 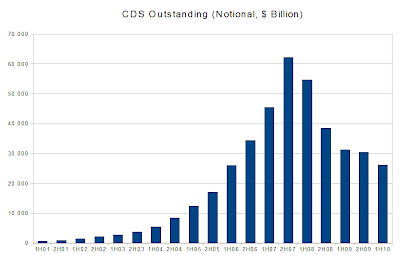 
This mad rush into CDS was not caused by some pent-up craving to hedge credit risk  - quite the reverse, in fact.  Instead of seeking to reduce credit risk on existing bond portfolios, the new players who came into the market after 2004-05  used CDS as riskier and more volatile alternatives to straight bonds, viewing them as juicy income streams.  That's when CDSs ceased to be "hedges" and became "hogs".

This became very obvious with the issuance of synthetic and hybrid CDOs, types of second-order derivative products made up of a mixture of various CDSs, that acted like bonds on "speed".  In just three years between 2005-2007 a total of $160 billion of  purely synthetic CDOs (e.g. CPDOs) were issued globally, while cash flow and hybrid CDO issuance reached nearly another $1 trillion.  (All Data: SIFMA).

Pointedly, a stunning 90% of all CDO issuance in this period was done for arbitrage purposes, i.e. to profit from the spread between the expected yield of the underlying CDO assets (e.g. CDSs) and the financing costs of the CDO tranches themselves.  This incredible percentage, more than anything else, reveals the true purpose of derivative finance: leveraged speculation.  It reveals that hedging - the usual excuse paraded out when credit derivatives come under criticism - was very far from the minds of those who dealt in them, since only 10% of the issues were "balance sheet" deals done to legitimately remove assets or their risk from originators' books.

It must be pointed out that CDS were not the only derivatives that went ballistic in that time.  Total derivatives outstanding reached a face value of $700 trillion in 2008 (see chart below). 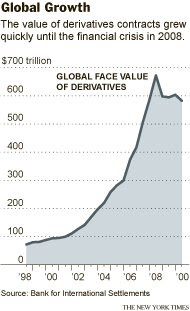 Anyway, it takes two to do the CDS tango so there's an obvious question begging to be asked: Okay, greedy speculators and/or foolish pension fund managers knowingly or unknowingly sold credit insurance before the crisis on the cheap (see chart below) and by the boatload .....  But who bought? 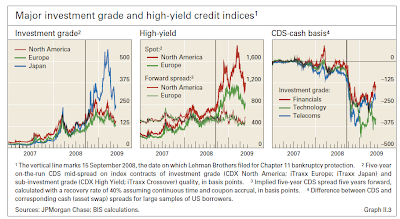 Chart: BIS
Who were so prescient and so smart as to keep buying the trillions of CDS that fools were literally giving away before the crisis hit?  Well, they didn't save AIG from collapsing into its CDS crater for the benefit of mom and pop policy-holders, did they?

The trouble with the property and casualty insurance business (and CDS are essentially P&C insurance products, no matter what bank traders say) is that it is very, very cyclical.  Competition increases and premiums  charged collapse when claims are low, but then a major disaster occurs and everyone scrambles to raise rates.  Sound familiar?

Right now, 9 out of the top 12 entities in CDS by notional amount outstanding are sovereign nations like Italy, Brazil, Spain and - of course - Greece (see chart below, click to enlarge).  Yes, it does make some sense as things stand right now with the CDS market, because nations are the largest debt issuers.  But how much sense does it make to allow  punters to go on betting on sovereign defaults, when it is the taxpayers who bail out the punters?  This is exactly like "Heads I win, tails you lose". 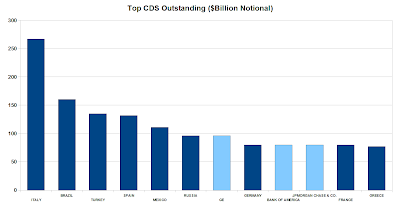 Data: DTCC
When you think about it, it's a paranoid/schizophrenic situation: paranoid CDS players have one personality that bets furiously against the credit of nations, driving up borrowing costs and forcing taxpayers to foot the increased bill.  Their other personality fervently believes that nations and taxpayers are the ultimate guarantors of the survival and smooth functioning of the financial system.  Can they have it both ways?  Well, sure - but only for as long as the sovereign CDS bubble lasts.  Because like any other bubble this too shall burst, and spectacularly so.
Let me put it another way: how long can a dog keep biting the hand that feeds it?
Posted by Hellasious at Sunday, January 09, 2011