In answering a reader's question about the relationship between quantitative easing (QE) and food price inflation (hat tip: Crito) I mentioned that QE may not, in fact, increase money supply.  This is because it is not known how much of the liquidity injected by the Fed is additive to the system, or if it is just filling the vacuum left by debt defaults.
Here are some data on total credit expansion from the Fed's latest Z1 report (click to enlarge). 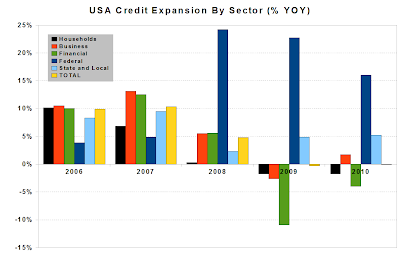 Zero Total Credit Expansion in 2009-10
Credit expansion in the private sector collapsed after 2008 with the financial sector leading the way  down by contracting over 15% in two years.   The federal government took over as its borrowing zoomed 76% after 2007.  Net-net, however, total credit outstanding has been flat in 2009 and 2010, at least until the end of the third quarter (latest data available).
It seems to me, therefore, that QE1 and QE2 have merely substituted for  some of the "money" that has been destroyed via debt defaults and should not in theory create overall inflationary pressures.  But markets are mostly psychological manifestations and not theoretical structures;  if punters believe new money is pouring out of the printing presses, then they bet accordingly and commodities - to name but one - rise in price.  That's what I call Quantum Finance or, Perception Creates Reality.

Looking at things from a longer-term perspective it is obvious that total debt (i.e. money) and prices should move together: if there is more money chasing goods and services prices will inevitably rise.  Commodity prices have tripled in the last ten years (see chart below - click to enlarge). 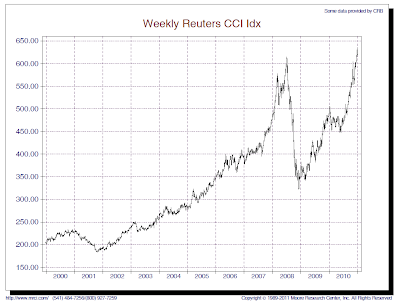 Reuters-CRB Commodity Price Index
The US dollar is the world's primary reserve currency used to price and trade everything from crude oil and gold to wheat and pork bellies, so it makes sense to look at how much of that "stuff" is around.  Total debt in the U.S. has more than doubled in the last 10 years. 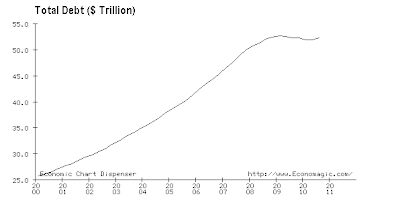