This story appeared in the NY Times a couple of days ago, reporting on the possibility of  buy-backs for deeply discounted Greek Government Bonds (GGBs) in the secondary market by the European financial stability fund (EFSF).  The particular story - there are many more like it in the financial press - was brought to my attention by Okie (hat tip), a longtime reader who wondered if I had something to do with it.
Well, no and yes.  No, I didn't write the story nor did I campaign actively from the "inside" for implementation of the buy-backs.  But, yes, I believe I was the first one to come up with the idea;  it was published in this blog on November 23 under the title How To Restructure PIGS Debt - A Modest Proposal.  Please read it if you feel like it.
Another reader wondered if I had a priori knowledge of these developments, i.e. if I possessed inside information.  Absolutely not - but I do have extensive knowledge and practical experience involving sovereign debt markets and derivatives, allowing me to recognize opportunity when it arises.  Couple that with a solid dose of common sense and, voila, A Modest Proposal.
No one, however, commented on the  (perhaps not so obvious) reference to Jonathan Swift contained in the original post's title.  A Modest Proposal was published anonymously in 1729 by the renowned Anglo-Irish satirist and in it he proposed that impoverished Irish farmers should fatten up their children and sell them as meat to the well-off gentlemen and ladies of the land.  His essay went to great detail, including statistics, economic benefit calculations, quotations from (fictional) presumed authorities - even recipes!
My post was not meant to be satirical in the least, of course.  However, the chance to allude to rich Europeans eating their own poor children as a solution, instead of firmly helping them overcome their difficulties, was too good to pass up.  And make no mistake, there were and still are many addle-brained idiots (I use the word in its classical meaning) in Europe who see the debt issue from a  destructive self-centered perspective.
Nevertheless, the market is starting to smell that a more comprehensive solution is in the works.  Though still at lofty levels compared to a year ago, prices for credit default swaps on GGBs have come down considerably in the past week (see chart below, click to enlarge). 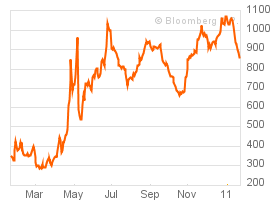 5-Year CDS On Greek Government Debt
My prediction for the European debt crisis is that it will involve a long process of adjustment and real economic convergence amongst the partner nations.  Unlike the 1990's, when countries who wished to enter the eurozone focused on meeting numerical targets laid down by the Maastricht Treaty, Europe today has no alternative  but to become more cohesive, more integrated, more co-equal, to use a fashionable term, itself alluding to the pigs of another famous essay.
It won't be easy, it won't be smooth, it won't be pretty.  But it will happen and it will succeed.
Posted by Hellasious at Saturday, January 22, 2011