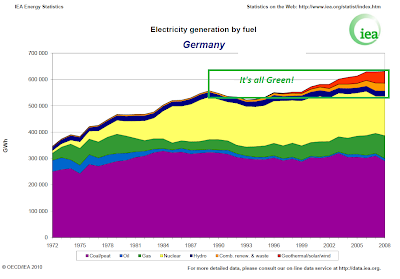 Chart: IEA
Germany - Going Green
So, yes, Germany's "valley" is very green, indeed.  Are the rest of us going to do something about it, or are we going to stay stuck in the past and suffer the consequences?
Oh, and if you're wondering: How Green Was My Valley is a classic film from 1941 about a Welsh coal -mining town.  From IMDb: "This story of a Welsh valley's turn-of-the-century descent from pristine paradise to despoiled coal mining region, is told in flashback form by Huw Morgan, an old man who has decided to leave the valley forever."
Posted by Hellasious at Tuesday, March 29, 2011