Greece: What Sunk The Boat

Greece is for all practical purposes bankrupt, staying afloat only because its European partners and the IMF are continuing to extend loans until it can stand on its own - or finally sink to the bottom.

And to stand on its own Greece must:

a) Reform an astonishingly inefficient and corrupt public sector.
b) Reshape its economy from the Borrow-Import-Spend bubble to become much more productive.

Today, I will focus on part (a) by identifying the super-torpedo that hit Greek public finances.

Right off the bat: this torpedo was social spending, and in particular spending on health and pensions.

The country has a system that combines the two, i.e. it provides healthcare and pensions for all workers and retirees who pay or have paid contributions (depending on industry sector total contributions can be as much as 65-75% of salary).

Look at what happened after 2004: government spending on social benefits started growing fast from 15%  of GDP, to 23% today (Greece entered full crisis mode in mid-2010).  With everything else staying flat, this huge increase in such a short time really sticks out. 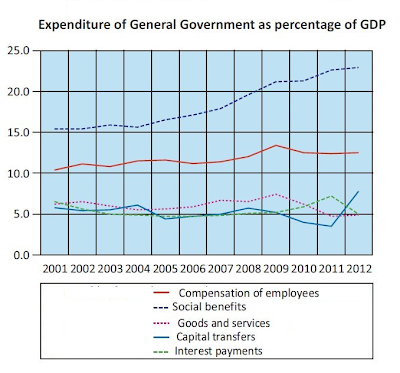 Narrowing the focus even further, lets look at healthcare.  First, some facts.

Per capita, Greece has more doctors and fewer nurses than just about every other country in the world.  Curious...

(Note: if the language is Greek to you, just look at the bars - the message is obvious) 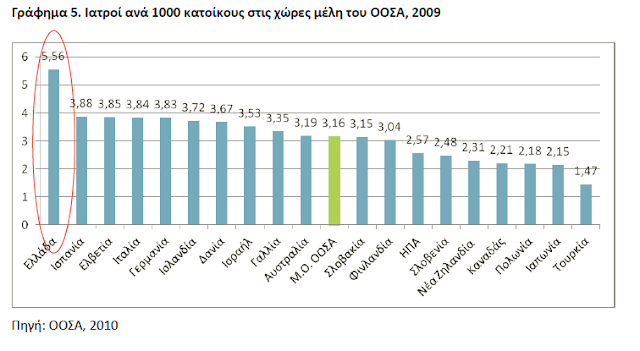 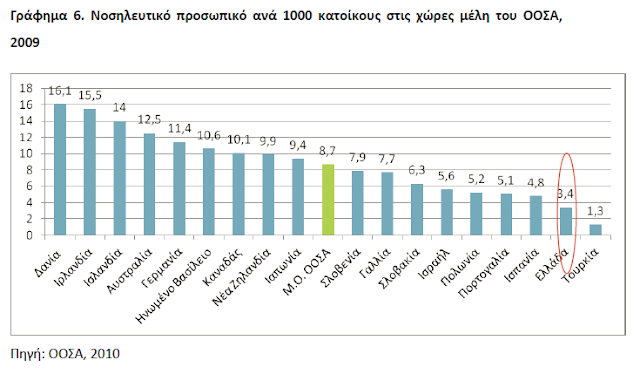 Nursing staff per 1000 residents - Greece is just about last

Just twenty years ago, however, Greece had the same number of doctors as everyone else - and also had very few nurses.  Why did doctor numbers zoom up while nursing staff stayed flat? Curiouser still... 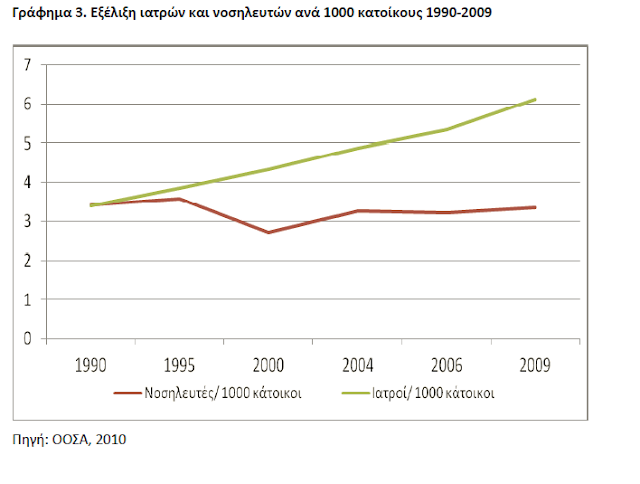 
Adding another piece to the puzzle, the number of pharmacies and pharmacists is also off the charts. 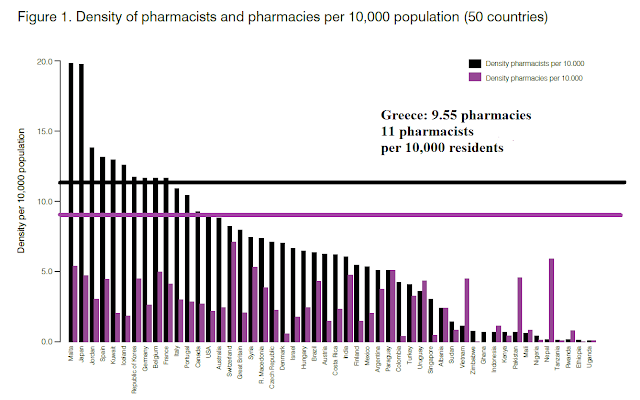 Number of pharmacies and pharmacists per 1,000 residents

With all of the above, one would think that Greece must be a public healthcare utopia - but, of course, it isn't.  The very low number of nurses is pretty indicative.   So... what gives?

The final bits of information are crucial:
It's no longer curious.. Greece had become a haven for astonishing overspending and criminal graft in prescription pharmaceuticals, with compliments of the state.  Doctors and pharmacists made a huge bundle by writing and filling millions of bogus prescriptions, the pharmacists directly and the doctors through "black" kickbacks and bonuses, some from drug companies themselves.  Nurses could not be part of the drug honeypot "mafia", so there was no incentive to become one and their numbers stayed very low.

Damn the torpedoes Greece, and if you want to survive you best put the engines on "Hold" and throw the bums overboard...
Posted by Hellasious at Tuesday, July 09, 2013