To better understand the current state of Greek banks we need to  go back in time.

During the late 1980s to early '90s Greek banking was a ho-hum business. Inflation ran at 15-20%, so banks were limited to gathering deposits from the public and lending to the state, its associated enterprises and a few large private businesses. Mortgages were rare, since home buyers mostly paid cash or arranged installment plans with builders. No credit cards, no car or vacation loans, no securities business, no trading other than day-to-day book balancing. It was a boring, belt-and-suspenders kind of culture, with bankers accorded almost civil servant status.

Things changed radically after 1994, when Greece decided to adopt the Maastricht Treaty and eventually become a member of the planned Eurozone. There were a couple dozen domestic banks operating by then, plus another dozen or so foreign ones - and business boomed.

The main profit driver was the "convergence trade" consisting of borrowing cheaply in foreign exchange (usually German marks) and investing in higher-yielding drachma assets (depos, bonds and repos). This simple cross-currency arbitrage was nearly risk-free, since the government had instituted a gradual and predictable sliding peg for the drachma's exchange rate against the mark.  The slide was maintained at less than the interest rate differential between drachmas and marks, thus all but guaranteeing large arbitrage profits for several years.

Global banking giants caught on to the game and piled in: BofA, Citibank, HSBC, JP Morgan, Goldman Sachs, Morgan Stanley, Deutsche, SocGen, Credit Suisse and many more, were very active in the drachma market.  Even Lehman, Bear Sterns and AIG showed up to the party...

The festivities eventually wound down when Greece formally adopted the euro in 2001 and spreads evaporated.  Dealing rooms in Athens, London, Frankfurt, Paris and New York bid a fond farewell to the drachma and went on to bigger - and eventually much riskier - trades (eg CDOs, CDS, tranches, etc -  what this blogger saw very early as the makings of a global disaster. Read my posts starting in 2006 and watch The Big Short).

Greek banks turned to traditional meat-and-potatoes retail banking: mortgages, consumer and business credit.  Given the complete absence of a credit culture amongst Greeks, however, it was like giving moonshine to a teen.  Starting from a very low level of private sector debt, things quickly got out of hand. The party was back on, this time going on in every bank branch across the land; household debt zoomed from a mere 15 billion euro in 2000 (12% of GDP) to 120 billion in 2010 (55% of GDP), see Chart 1. 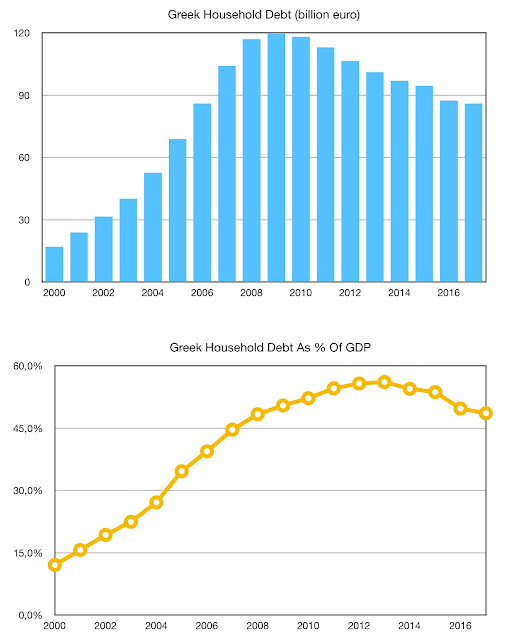 While most other western nations’ households had significantly larger debt loads as a percentage of GDP, Greeks increased their debt so fast, and had so little experience in handling it, that it spelled serious trouble for banks down the road.  And as we saw in a previous post, such explosive growth in easy credit created a bubble economy centered on highly overpriced real estate and consumer spending of imported goods.

The Greek economy grew strongly for a decade, but it was all based on a sea of debt.  It was not long before the debt storm that started on the shores of America would engulf Greece, too...

Posted by Hellasious at Thursday, November 09, 2017