After nearly a decade of economic misery today's title arises spontaneously: where is Greece headed?

Unlike other economies that got into deep trouble when the Debt Bubble burst in 2007 (e.g. Ireland), Greece hasn't managed to bounce back yet and is scraping along the bottom for four long years. 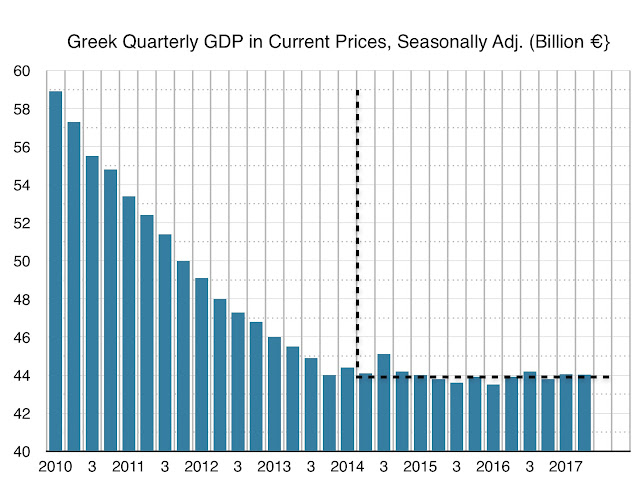 For independent confirmation of GDP numbers I look at the total consumption of energy, a more fundamental measure of economic activity. The two charts are in agreement: Greek GDP is down approx. 25% from its peak and is bottoming out. 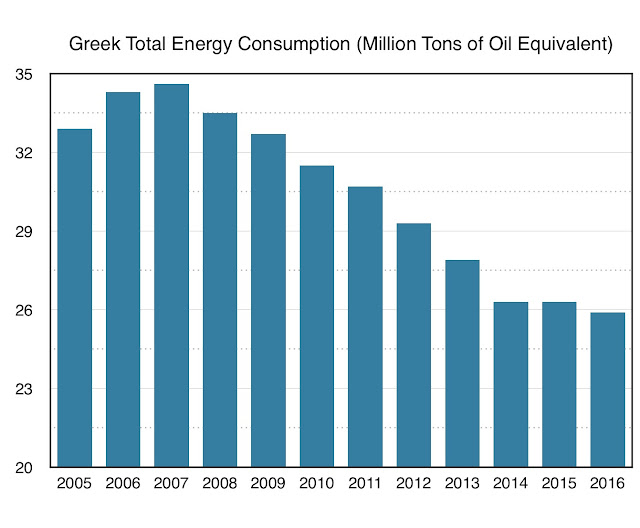 The reason for the prolonged malaise is the non-productive model of the economy, a situation going back decades.  There is no value in rehashing ancient history here; suffice it to say that when in 1980 the rest of the world went towards economic liberalism with Thatcher, Reagan and Deng Xiao Ping leading the way, Greece went in the exact opposite direction towards state sponsored socialism and - even worse - crony capitalism.  And when the country decided to join the Eurozone twenty years later, it did so without first transforming its economy to match the strict requirements of a strong currency.

I won't delve into Greek politics. I believe it to be a complete waste of time and, besides, there are thousands of other outlets that do nothing else.  Instead, I will focus on hard data.

So, how is the economy doing now? 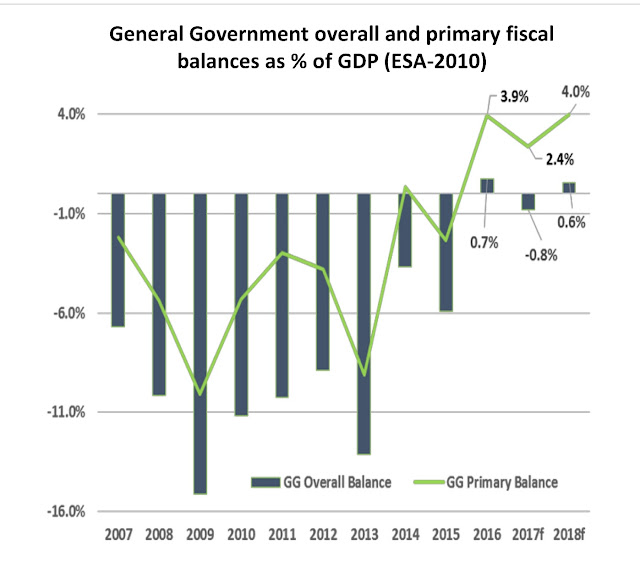 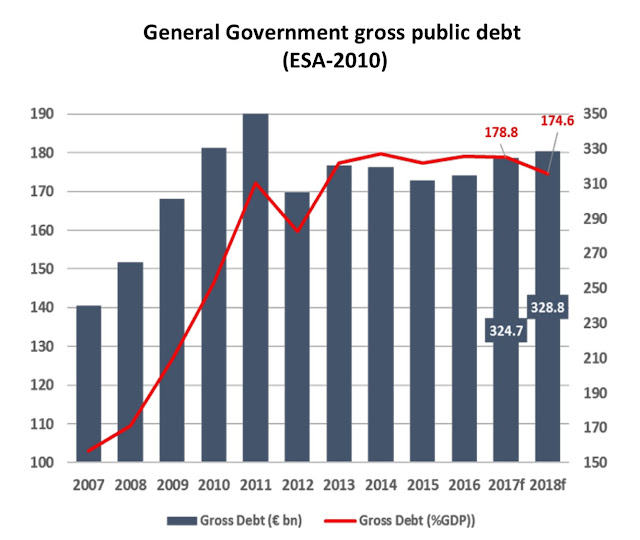 Unemployment peaked at 28% and is gradually falling, reaching 20.6% this past August. 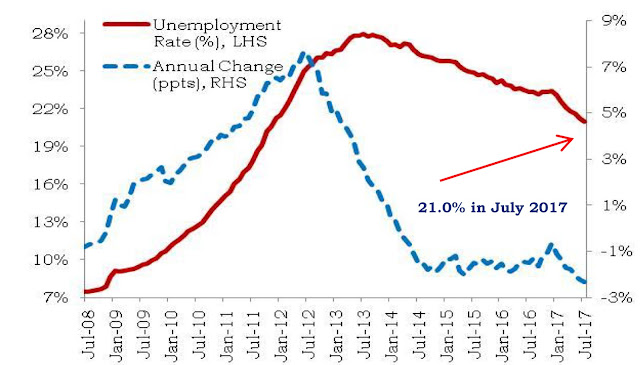 Tourism is hitting records, a major positive contributor this year. Employment in this sector is rising strongly, too. 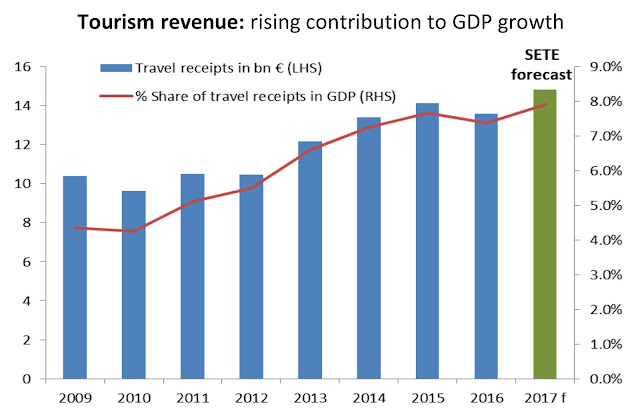 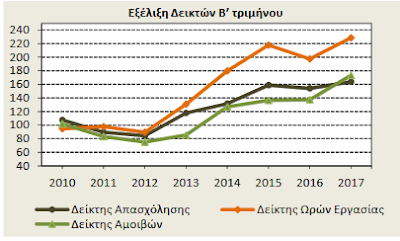 Industrial production, manufacturing and retail trade are all trending up in the last 12-18 months. 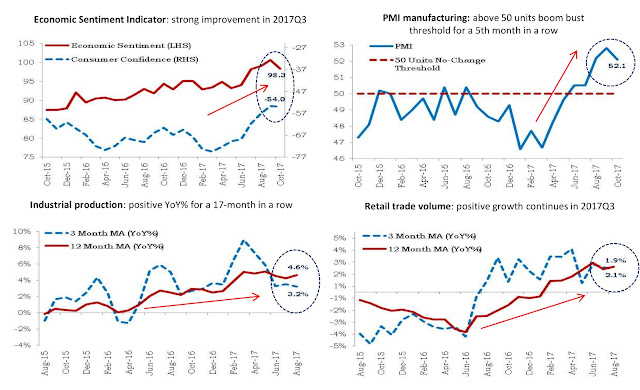 Revenue from shipping, a traditional Greek stronghold, has dropped almost 50% from the 2010 high, suffering from the global weakness in shipping rates. However, charter rates have bounced back strongly in the last 18 months, pointing to a more positive outlook. 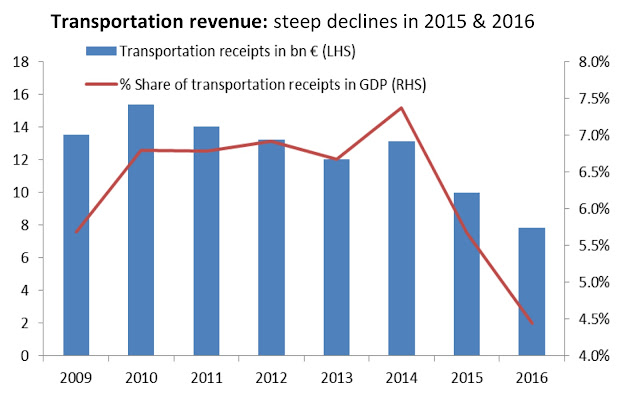 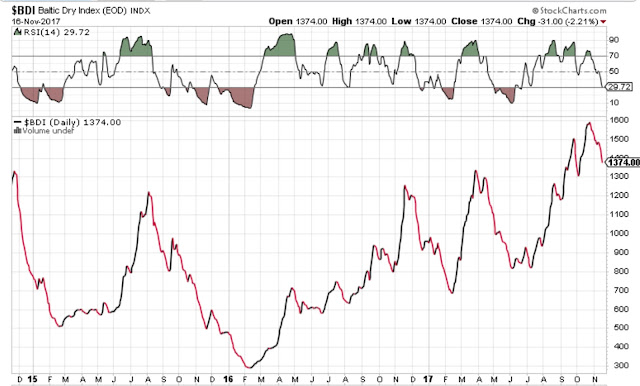 Overall, it looks like Greece is bouncing back, albeit slowly.  What could make things move faster towards pre-crisis levels?

Let's compare the makeup of GDP  in 2007 and 2017: household and government consumption, capital formation and the import-export balance . 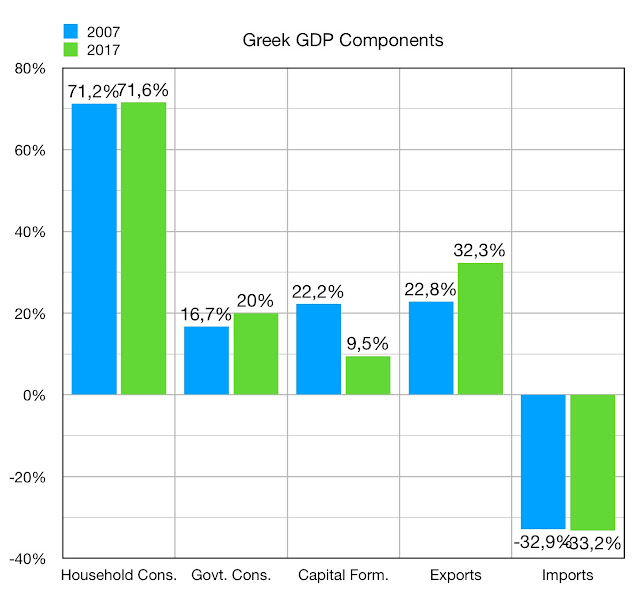 Two things immediately stand out: the collapse of capital formation (i.e. investment) and the notable rise in exports.
(An explanation  is necessary here: given the high level of investment in Greece in the past, how come it did not become more productive and competitive?  Because investment was mostly in overpriced residential and commercial real estate, largely built "on spec".  In some years new home building vastly exceeded new household formation, creating a large number of unsold properties.  The debt bubble created a real estate bubble and funded a massive trade deficit.)

It's obvious that rapid and significant incremental growth can only come from investment and secondarily from exports. In fact, the best possible combination would be export-oriented capital investment, e.g. factories producing goods for export and hotels catering to foreign tourists, to mention just two examples.

Capital for such investment is not going to come from Greek banks who have slashed their loans to the private sector by 27% during the long recession.  In any case, until they recover from the vise of NPLs and low deposits they simply don't have the money to lend. 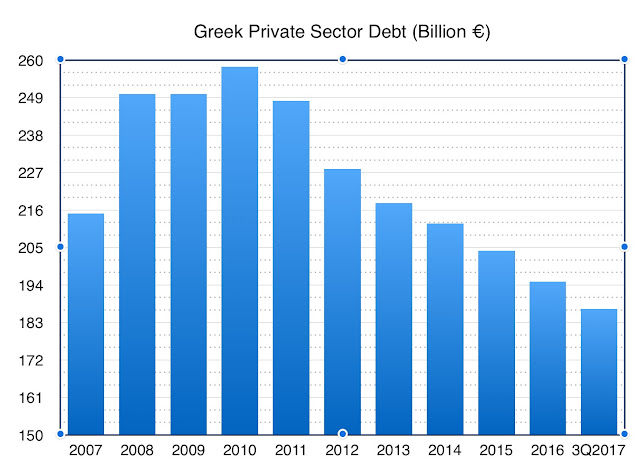 To bounce back Greece must clearly attract foreign direct investment (FDI), where decisions are made based on a country's  comparative economic advantages, including political stability, taxation, legal and labor conditions.

In the next post I will try to answer two questions: a) is Greece a good FDI opportunity right now and b) how "investment friendly" is it?

P.S.  I just saw this interesting graph from a respected Greek economic research periodical. It shows that residential real estate construction is expected to rise almost 30% in the near future, based on the number and size of building permits issued.  It's the first increase in at least 10 years and, if it materializes as strongly as predicted, it could have a measurable impact on GDP. 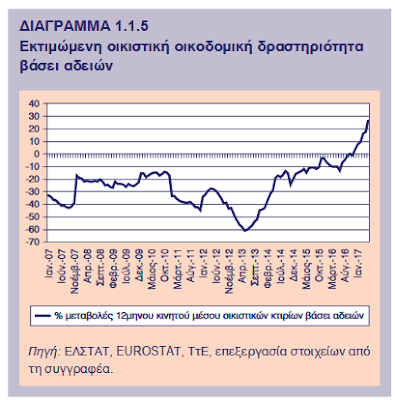 Of course, this increase comes from a VERY low base after 10 years of constant decline. The next chart is pretty astonishing, IMHO.  Private construction activity is now just 12% of what it was in 2007. Bars are number of permits, dotted line is total surface area in sq. meters. Truly explains the collapse in the investment component of GDP. 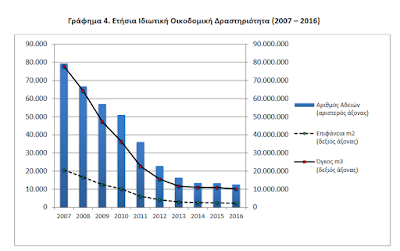