This week Sudden Debt pays homage to the opening of yet another Star Wars episode. The title comes from the third installment released in 1983, but my version is more recent and less galactic. 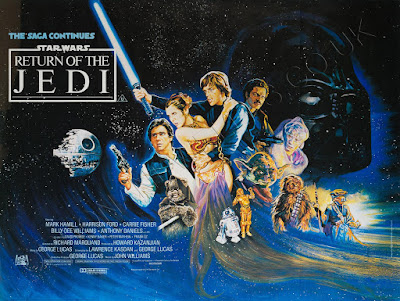 "Greek banks lack earnings visibility."
"There is no story, other than bad loans."
"Their balance sheets are shrinking."
"There are no creditworthy borrowers."

If you are at all familiar with the Greek Depression and its Greek banking saga you have certainly heard one or all of the above.  In fact, up until recently I would be the one saying them - but no more.  I now strongly believe there is a story and strong earnings visibility for Greek banks.

What's new, you ask, what has changed?  To answer that I must first take you back almost a quarter century. In line with Star Wars, let's call it a prequel.


In early 1994 the Greek socialist government made a seminal decision: it would do everything necessary to meet the Maastricht criteria for membership to the European Monetary Union and its planned common currency, the euro.

One of its first actions came in May of the same year when it abolished FX and capital controls on the drachma. Speculators immediately attacked, betting on a massive  devaluation. However, the Bank of Greece raised short-term interest rates sharply to triple digits and ended the crisis within two months.  Speculators who had shorted the drachma  withdrew with heavy losses.

What followed was a seven year period of unprecedented prosperity for banks and investors who followed the Convergence Trade: huge profits were made by borrowing foreign exchange at low interest rates (mostly German marks, DEM), exchanging them into Greek drachmas (GRD) and investing at much higher interest rates, either in drachma deposits or high yielding Greek Government bonds (GGBs).

It was a safe bet because the government, acting through the
Bank of Greece, was committed to a slow and predictable devaluation of the DEM/GRD exchange rate (i.e. a sliding peg) which was always less than the cross-currency interest rate differential.  In simple terms, investors made, say, 12% in drachmas annually and lost only 8% on the gradual DEM/GRD devaluation.  That 4% differential was pure profit.  As time went on this differential narrowed with Greek interest rates dropping gradually and eventually converging to other EMU currencies' rates.  Thus the name Convergence Trade.

D0zens of local and foreign banks rushed in.  Institutions such as JP Morgan, Deutsche Bank, Bank of America, Morgan Stanley, Citibank, UBS, Credit Suisse, HSBC, Merrill Lynch, Goldman Sachs, SocGen, ABN and many, many more were in the drachma market daily. Even the erstwhile Lehman Brothers and Bear Stearns made guest appearances to what was, literally, a "money for nothing" party.. (Well, it wasn't really "nothing": these profits were ultimately paid by Greek taxpayers, the price paid for admission to the eurozone).

Greek banks profited handsomely, too.  At the time when retail and corporate banking was sleepy at best, dealing rooms were roaring.  Some of them exploded from 5  to 50 employees within just two years, as profits soared and bonuses were lavished on one and all.  For several years, over 50% of Greek bank profits came from Convergence trading gains.

As time drew closer to Greece's admission to the eurozone drachma interest rates dropped and the party finally ended in 2001. Dealing room profits dropped sharply and several foreign banks that had set up shop in Athens shut down and moved on.

But what about Greek banks?

At the time, Greek bank shareholders were suffering the effects of a punishing bear market on the Athens Stock Exchange.  It was the result of a truly historic bubble that took place in 1997-99, one that saw even mountain goat herders selling their flocks to buy into the craze.  Stocks had doubled, and then doubled again and again... it was madness, until the inevitable crash which started in late 1999 and concluded in 2003.

Apart from the effects of the bubble bursting, banks were suffering from the imminent loss of Convergence Trade profits and a lack of future earnings visibility (ring a bell?).

As you can see from the charts for Alpha Bank, after first going ballistic, shares dropped as much as 80% top to bottom between 1999-2003. Earnings fell 58%. 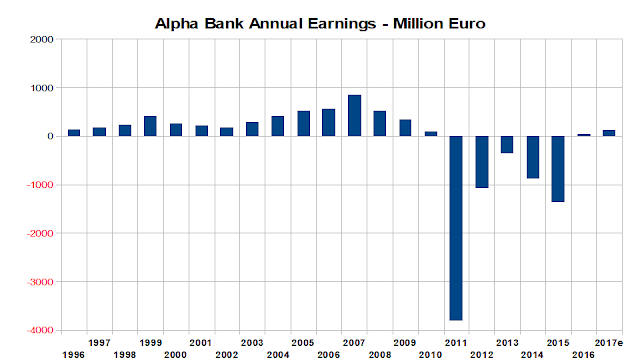 After 2002, however, earnings and share prices recovered strongly as banks focused on retail and corporate lending.  Prior to the euro, Greek households and businesses carried very little debt since drachma interest rates were very high.  Things changed rapidly after 2002, when a combination of Greece's entry to the eurozone and globally low interest rates post 9/11 events made borrowing cheap and easy. Credit expansion ran at breakneck speed, boosting real estate prices and GDP growth.  Shares soared again.

Greece, facing ever larger budget deficits, and unable to borrow on its own, had to accept bailout loans from the EU and IMF;  its bonds suffered deep haircuts.  Bad loans inundated bank balance sheets (today NPLs and NPEs amount to approx. 50% of all loans), profits turned into losses and banks were re-capitalized three times, with massive dilution to their original shareholders, who saw their investments collapse 99.5%. Balance sheets contracted by 45% in 2010-17 and the industry consolidated furiously. There are now just four major Greek "systemic" banks, accounting for a whopping 97% of all  assets.

OK, enough with the prequel.


What is the sequel? Where are future profits going to come from (visibility), what is the "script" for our Greek Bank Wars?

In my estimation Greek banks are uniquely placed to take advantage of two major opportunities:

Aha! You say.. Where are banks going to get the money to buy new GGBs and make fresh loans?  After all, they are still borrowing (if less every week) from the ECB's Emergency Liquidity Assistance program, aren't they?
Here's the answer: deposits.  Yes, deposits - those that fled in a panic during the Greek crisis, going to safe havens abroad, in safe-deposit boxes and under mattresses. Banks in Greece held 281 billion euro in deposits in 2009 (122% of GDP) and a mere 144 billion as of this past October (80% of GDP). But, unlike the US Great Depression, Greek bank customers have not lost a single penny of their deposits. Their money is still intact. Even if we deduct foreign depositors from the 2009 figure above, there is a very, very large pool of money that, given the right conditions, will come  rushing back into Greek banks - perhaps as much as 100 billion.

All right... Just like the Star Wars space opera, this has been a larger post than I normally write. Yet, I think the subject is really worth it.  Since I don't think readers of Sudden Debt need me to spell out the obvious conclusions (you are much too smart an audience), I will leave you with...
May the Force be with you.
Posted by Hellasious at Saturday, December 16, 2017