I have in previous posts expressed my doubts about official Greek GDP numbers as reported by the statistical authority (ELSTAT).  The major reason is the large "shadow" economy which operates under the table to avoid high value-added, income and social security taxes.

A recent study by the Institute for Applied Economic Research at the University of Tübingen says Greece has the largest shadow economy in the world at 21.5% of GDP. 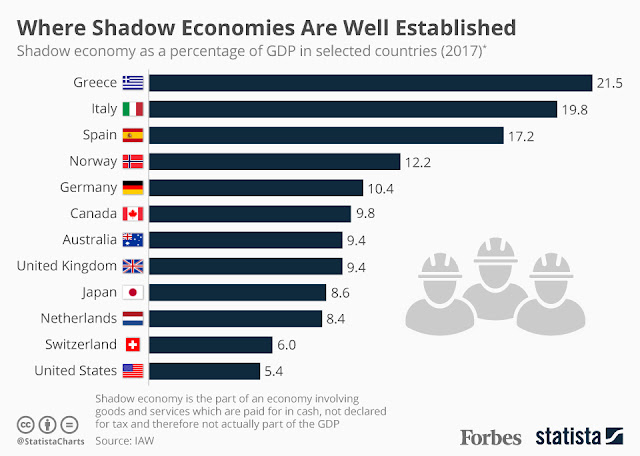 It follows that calculating growth/recession rates becomes quite problematic since variations in the shadow economy cannot be counted. Thus, the need for a better yardstick, one that is not as affected by cheating on taxes.

My personal favorite is energy consumption (after all, every activity requires energy), and in this post I will try to provide a better estimate for real Greek GDP in 2017.

British Petroleum publishes an annual energy statistics study, widely considered the most authoritative of its kind.  Doing a quick division of official real GDP to energy consumption, I come up with the chart below: Greek GDP per unit of energy consumed. 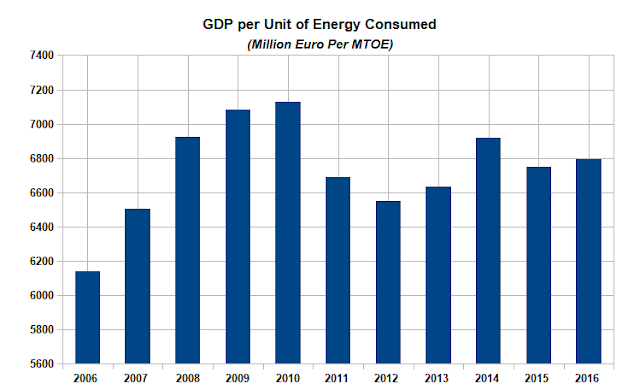 We see that it varies between 6.1 to 7.1 billion euro per million metric tons of oil equivalent (MTOE).  There is a  good explanation for the large rise between 2006-10: during its bubble years the Greek economy was driven mostly by housing construction, a notorious source of tax cheating;  it is also very energy intensive.  Therefore, while energy use was increasing, reported GDP wasn't following pace, hiding in the shadows instead.  This changed abruptly when the construction business tanked following 2010.

Construction is now moribund (down almost 90%), so I'm pretty comfortable with using an average of 6.7 billion euro per MTOE as a useful correlation factor between economic activity and energy consumption.  The variation has been quite small, between 6.5 and 6.9 in the last five years and even smaller during 2014-16.

Moving right along, I'll also assume that in 2017 total energy consumption increased 3.8%, i.e. the same as for electricity alone (total energy data won't be available by BP until later in the year). 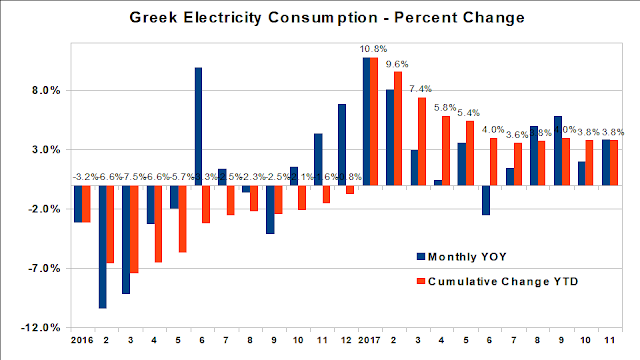 It all boils down to this: in 2017 my estimate for real (i.e. inflation-adjusted) GDP is


Is this figure supported by other data? Yes, it is: for example, we know that tourism accounts for approx. 20% of all economic activity in Greece by direct, indirect and induced effects. Since we saw a 10.6% increase in tourism receipts during 2017, it follows that GDP growth from tourism alone should be +2.12%.