President-elect Joe Biden just signaled his intention to boost the US economy with yet another stimulus package of $2 trillion that will rain down money from the helicopter.  Where will it come from? It will be printed by the Fed out of thin air, of course.  To be exact, the Treasury will issue bonds and the Fed will buy all of them, boosting its balance sheet to unimaginable levels (see chart). 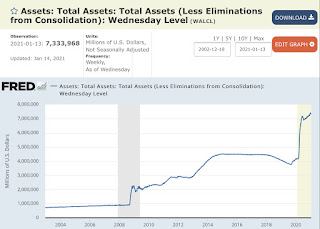 Just 12 years ago the Fed’s assets were a mere $1 trillion.  Today they come to $7.3 trillion and, if Mr. Biden goes through with his plan, they will soar to $10 trillion or 50% of GDP. In case you don’t comprehend what this means, it’s really very simple: the government/Fed is printing money. Since the economy is stagnant, this is a debasement of the currency, pure and simple.  The hope is that this torrent of money will kickstart the economy because the recipients will spend it on.... what??? Imported clothes, tablets and games?? (Note: imports are subtracted from GDP).

In hopes of obscuring reality, talking heads are giving this most ancient of government currency debasement actions a new name: it’s now called Modern Monetary Theory.  Oh, sure, the excess money is supposed to be drained in the future future by increased taxation..  but, show me a politician who promises to raise taxes and I will show you a unicorn.