For one, a bubble is not "real" until after the fact, i.e. after it has burst. It then becomes so obvious that people shake their heads in disbelief at their blindness.  The Emperor's New Clothes, the tale by Hans Christian Andersen, is a perfect example of mass suspension of disbelief.  Yet, the signs are there to see beforehand, obvious to anyone who is willing to see with his very own eyes instead through the viewpoint of mass, crowd hysteria.

Why would a single tulip bulb sell for as much as a house? Why would anyone, including the genius Sir Isaac Newton, participate and be fleeced in the South Seas madness?  Why would anyone believe that subprime loans could be sliced, diced and tranched into AAA bonds, which were then used for credit derivatives, which were in turn turned into more AAA bonds?  Cutting cow apples into small pieces doesn't turn them into gold, does it? Duh...

Excess -  in and by itself - is not a very good indicator of bubbles, however.  The one element that is, however, is a screaming imbalance between present fact and projected future.  For example, back in the Credit Crisis of 2006-08 many mortgage lenders, brokers, etc were already failing and/or reporting big increases in non-performing loans (fact), yet markets were ignoring the news and kept on making new highs, projecting a rosy future forever.

So, what about today? What is the present imbalance?  In my humble opinion, it's the obvious decline of the United Sates as a stable, superpower Empire (fact) contrasted to the stratospheric level of stocks and near zero interest rates for bonds (projected future).  This imbalance is so major, of such historic proportions that it goes unreported and under-analyzed by most media.  I mean, yes, the Capitol stormed by the "unwashed masses" was in every front page, but it was mostly brushed off as an extremist event.  To that I say... remember the Bastille or, more recently, the Berlin Wall. 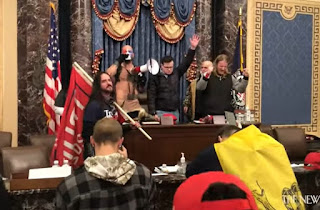 Another fact that markets continue to ignore is global warming and climate change.  The absolutely necessary changes in our Permagrowth model will impact the level AND makeup of economic activity.  Business cannot go on as usual, consumers cannot go on buying $1 t-shirts or (more importantly) paying $1,000+ for yet another, newer edition of a smartphone, tablet, whatever.  Transforming our society and economy to a Sustainable Model will create new businesses BUT... the overall direction will be towards less of everything. Think of Greta Thunberg as the child who pointed to the Emperor and said.."but, he's naked!!". If you don't like Greta, remember Al Gore and his Inconvenient Truth, which is now becoming A Clear and Present Catastrophe. 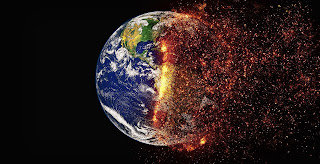 Therefore, two very, very large "facts" are pointing to one direction while markets are obliviously whooshing towards another.  And that, friends, is The Real Deal Bubble.