The Fed claims that the US economy is not out of the COVID woods yet, therefore monetary policy has to remain uber-loose until at least 2023.  The most frequent statistic quoted is "high unemployment" and its attendant output gap.

OK then, let's look at unemployment.  From the Bureau of Labor Statistics (BLS) we get the following chart: 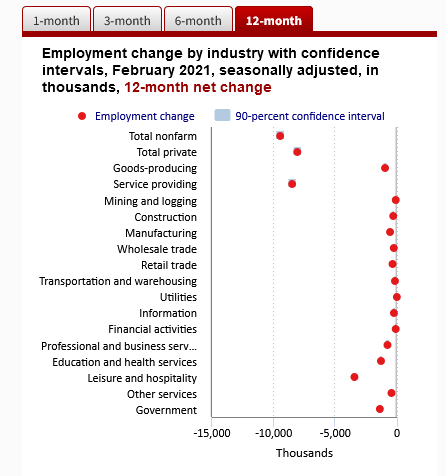 In February, total non-farm payrolls were down by 9.5 million versus last year. That's certainly lots of jobs - but what kind of jobs are we talking about? Are they professional, highly paid positions? No: 3.5 million are in leisure and hospitality (i.e. restaurants, hotels, theaters, etc) where wages are the lowest, 1.4 million are in government (lots of shutdowns) and another 1.3 million in education and healthcare (schools and colleges were closed).  Those three sectors alone account for 6.2 million of the total jobs lost between Feb. 2020 and Feb. 2021 - that's 65%.

As the COVID emergency subsides, these are the kinds of jobs that are coming back fastest.  Leisure and hospitality is already leading the comeback.  Last month the sector added 355.000 jobs out of a total of 379.000 (94%) in employment gains.  And as soon as education goes back to in-person classes (already happening), those jobs will be restored, too.  Government may be a bit slower in restoring some services, but it won't be very far behind.  So, I have to ask... what output gap???

It is, therefore, highly questionable as to why the government thought it necessary to send $1.400 to just about every American. I can certainly understand helping those who are unemployed, but... everyone?

I'm not the only one who thinks this is irresponsible, dangerous even.  Larry Summers just spoke out again - Bloomberg notes in an article (my bold):

In his latest attack on the recent rush of stimulus, Summers told David Westin on Bloomberg Television’s “Wall Street Week” that “what was kindling, is now igniting” given the recovery from Covid will stoke demand pressure at the same time as fiscal policy has been aggressively eased and the Federal Reserve has “stuck to its guns” in committing to loose monetary policy.

“These are the least responsible fiscal macroeconomic policy we’ve have had for the last 40 years,” Summers said. “It’s fundamentally driven by intransigence on the Democratic left and intransigence and the completely irresponsible behavior in the whole of the Republican Party.”

I'm with Larry, who now sees a one in three chance of the US falling into stagflation, a condition we haven't experienced in 40 years.  I may remember it, but today's "investors" (aka kiddies running algos) have not a clue, they could care less about such outmoded, Buffet-era fundamentals.  Today, it's all about momentum and pie-in-the-sky "tech".  Their hero being Elon Musk, all I have to counter with is.. PT Barnum.