In a recent post I rang the alarm bell for Contracts For Difference (CFDs), a so-called derivative product that allows for enormously leveraged bets on anything from stocks, FX and commodities to whatever moves.  Such “products” are very old, they were the staple of all bucket shops in the US back in the late 19th and early 20th centuries.  You can read all about it in Reminiscences Of A Stock Operator, my all time favorite book on markets.

Guess what? A private hedge fund (an animal also known as a Family Office), called Archegos (Greek for Chief) just blew up, as such bucket shop CFDs turned sour.  Its prime brokers (Goldman, Nomura, Credit Suisse) had to liquidate $20 billion in shares (real ones, not the bucket shop kind) to cover massive margin calls. They, too, are expected to incur losses north of $1 billion. (Update: losses now estimated at $6 billion)

The impact of such large forced real sales (ie not the algo nonsense volume) was large, indeed: Stocks such as Viacom CBS, Baidu, etc were down as much as 30%+ in one day.

One time event? Maybe, after all a hedge fund blowing up is not the real news here, it happens all the time.  The important news is in the tape: Archego’s brokers had to dig all the way down to -30% to -40% to unload a rather middling amount of shares; $20 billion may sound like a lot, but with market capitalizations in the trillions it should have been a drop in the bucket.  But, it obviously wasn’t. 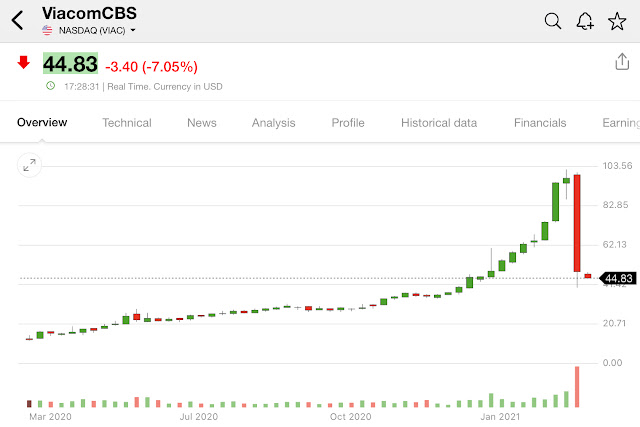 What this means is this:  THERE ARE NO REAL MONEY BUYERS OUT THERE.  The market is very, very, very thin.

Archegos is, I’m afraid, but the first domino to fall.