You read the post title and go…WHAT? WHEN? Seriously?

You may be excused your incredulity since none of the MSM, financial and not,  carry this headline.

Two days ago the Fed  raised two key short term rates by 5 basis points (0.05%): the overnight reverse repo went from 0% to 0.05% and the IOER (Interest On Excess Reserves) from 0.10% to 0.15%. That’s interest paid by the Fed to the banks, money market funds and other such participants in the money market who are permitted to deal directly with the Fed.

In essence, the Fed just raised all short term interest rates by 0.05%.  It may not seem like much, but with rates near zero, even 5 bp makes a huge difference. For one, it makes carry trades more expensive and thus makes holding very short term Treasurys less attractive.

The reaction was immediate, as 2-year Treasury yields predictably jumped by 5 bp to 0.21% in the secondary market.  That’s the highest level in one year(chart below). 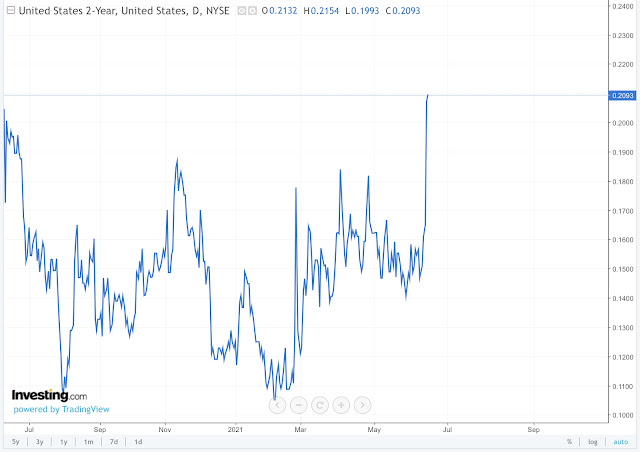 And what about the “liquidity drain”? Yesterday, the Fed’s overnight reverse repo (now at 0.05% vs. 0%) soared to a new all time record $755.8 billion.  That’s an operation where the Fed sells Treasuries to banks, money funds, etc, with an agreement to repurchase them the next day at a slightly higher price (0.05% annualized).  Participants can choose to keep rolling them over, for as long as the Fed elects to do so. Obviously, by accepting ever larger amounts the Fed is actively draining at a record pace.

Is this important? You better believe it, because the Fed’s actions signaled that the ultra low interest rate era is over.  I fully expect more such moves in the future.  They will likely be cautious and seemingly technical in nature, out of the non-professional public’s eye.  But, for professionals in the money market it is exactly such moves that matter.

The other, less obvious conclusion is that banks and other very short term investors, like money market funds, are choosing to do the reverse repo with the Fed in record amounts instead of using it in other, riskier ways.

So, we are seeing a cautionary trifecta for all markets: higher interest rates, record liquidity removed by the Fed and a rise in risk aversion.  Commodity markets reacted instantly, significantly marking down  prices across the board. The Dow Jones Commodity index saw its biggest drop in over a year (chart below). 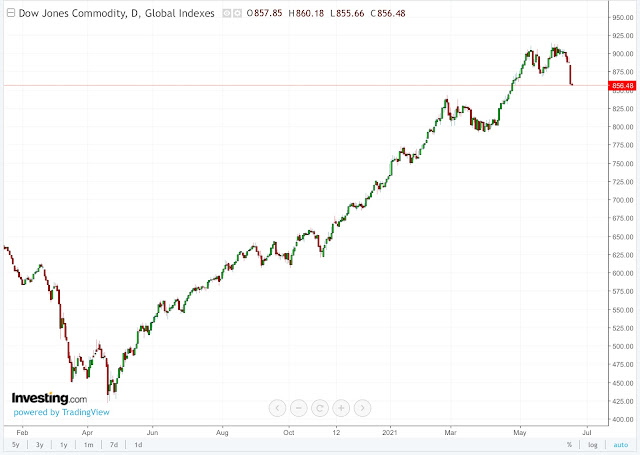 The stock market, on the other hand, is still “sleeping”, trudging along sideways near record highs. Given that clueless, unsophisticated retail investors are now its mainstay, I’m not surprised.  They are always the last to get the message.  After all, you can’t expect app-drunk millennials to delve into the all guts - no glory bowels of the mundane money market.. but they should.
PS Drawing a parallel with the 2007-09 Great Debt Bubble, there were plenty of early warnings that it was “game over”, particularly obvious in the mortgage broker and lender market. Several marginal and overbloated mortgage lenders out West were hitting the brick wall, but almost no one was paying attention. Yours truly was, however… if you care to read older posts, it’s all there, very early on.
Posted by Hellasious at Friday, June 18, 2021