The Federal Reserve was founded by Woodrow Wilson in 1913.  In its 106 years as guardian of the US dollar to the end of 2019, the Fed  accumulated a total of $2.64 trillion of federal government securities  on its balance sheet - Treasury bills, notes and bonds.

But in just the last 18 MONTHS alone, it bought another $3.1 trillion, bringing the total to $5.7 trillion.  Think about it...in just a year and a half the Fed monetized ("printed") more government debt than in its entire history of 106 years!! (Chart below) 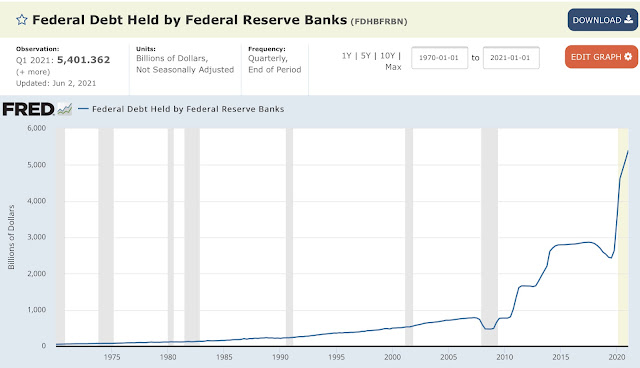 So, let me get this straight: The Fed, Treasury and (most of) Wall Street thinks this is OK? That it is OK to continue monetizing to the tune of $1.44 trillion per year? (QE is currently at $120 billion per month). To add each year more money, more fiat dollars, more debt than in the previous 100 years??

And that the spike of inflation, already running at 5% over the past 12 months and even higher on a monthly basis, i.e. it is accelerating, and which is obviously caused by this deluge of fresh money, is going to - somehow - be transitory, without taking immediate and drastic remedial action?

What kind of Kool Aide are they drinking?

In the 1970s and 1980s the same brand of officials and "analysts" thought that oil price shocks were "transitory".  It took two decades of very high interest rates, recessions and untold economic pain to tame the double digit inflation that became entrenched and proved to be NOT transitory, after all. Does anyone now remember or respect Arthur Burns, the. Fed chairman who in 1970 caved in to Nixon’s demands for easier money so that he could win the elections? Maybe… but I’m sure no one has even heard of George Miller, a Carter era chairman who lasted less than two years. Dustbin of history for the spineless.  But everyone remembers Paul Volcker, the chairman who had to come in and very painfully clean up the huge accumulated mess of his predecessors. A giant amongst Fed chairmen, even literally at 6ft7in (2.01m).

Today, we have a money supply shock which is raising prices for everything, not just crude oil. And it is doing so very, very fast.  Why? Because sane suppliers of raw materials and services, labor included, realize that the dollars they get in return are worth less in real, physical goods and services terms, than just over a year ago.  So, they demand more dollars for them - thus, inflation. Add to the mix China, the biggest global buyer of commodities who is currently buying huge amounts, stocking up against the very real possibility of geopolitical friction and, voila, this isn’t going away soon.  Again, unless the Fed, ECB, BOJ and BOE immediately change their tune.

Let me use the Bernanke helicopter paradigm:

You are standing in your soybean field when a helicopter approaches and proceeds to "dust" it with a million dollars. And not only your field, but Farmer Joe's too, right next door, and so on down the line. And the heli keeps on circling and raining money, and not only over fields but on factories, offices and homes, too. The silo operator who buys your crop? He’s dusted. The cattle grower who buys soy to feed his cows? Dusted.  The family home where people buy steak? Dusted.

There's an almost unlimited supply of dollars, but they can’t make your soybeans grow any bigger or faster - their supply is, of course, physically limited by land, nature and the application of energy and labor. Limited physical supply meets unlimited money.

At what price, in dollars per bushel, will you now be willing to sell your soybeans to the market?. More, less or the same as before the dollar helicopter? I rest my case.