This Time It's Worse - Much Worse

In my last post I laughed at the notion that "This time it's different" when it came to money creation, inflation and asset bubbles.

Well, I was wrong - because this time IS different: it's much worse.

There has never been a time in History when the world's major central banks/monetary authorities were so astoundingly "loose" (to use a polite term), creating a bubble so far reaching across all asset classes and with the participation of all social and age groups.  It is no longer a mere bubble, but a bona fide mania stoked by the power of social media. Which, in turn, are most certainly and obviously being exploited by those who have most to gain by this PsychoBubble - the scammers, pump-and-dumpers, carnival barkers.  Not to mention the legitimate brokers, investment bankers and asset managers who are raking in hundreds of billions in commissions and fees.

Here is what is worst, this time: the printing of trillions of US dollars and EU euros is undermining their future as reserve currencies.  So far we have not seen any major currency devaluation because they cancel each other out, ie there is no other major global currency out there to compete with them. So far..

Because China and its yuan are lurking and preparing to pounce.

It is certain that China wishes to become the next global superpower, supplanting the US (the EU is not a superpower, it's an agglomeration of separate economic interests that try to steer a common direction, mostly failing).  It was the world's first real global economic superpower, it invented paper currency and the first weapon of mass destruction (gunpowder).  It even invented a central bureaucracy (mandarins).  So, it has the historical/social background and understands its context.  Furthermore, excluding the loony Mao era, China has always been a truly capitalist, mercantilistic society driven by the quest for profit.

Where is China today? It is the world's largest economy in Purchasing Power Parity terms (PPP) and second in absolute GDP.  Its GDP has grown astonishingly fast, from less than 10% of US GDP in 2001 to over 70% today. At the same time its share of global GDP has gone from 2% to 18%.

Let's get this straight: China can no longer afford NOT to issue and maintain a global reserve currency.  It cannot stay competitive without one, it cannot control, purchase, manufacture and market raw materials, products and services around the world without making the yuan a global reserve currency, starting with removing all trading restrictions, while - like the US and EU, after all - maintaining a strict control over its monetary policy.

Obviously, it needs to do so, and soon because its economy is simply too large to continue prospering without a reserve currency. There is absolutely no question in my mind that it also wants to do so, strategically.

a) Can it do it? Yes, of course. Being the world's largest exporter of just about everything the rest of the world buys, it has a ready-made existing demand for its currency. All it has to do is to invoice in yuan instead of USD or EUR.  Likewise, it is an importer of enormous quantities of raw material and luxury goods, so trade balances can be "square" with many of its trading partners, if not with the US (that's America's and the dollar's obvious Achille's heel).

b) How will it do it? In a word, carefully but most likely suddenly when conditions are right. In fact, it is already carefully preparing to do it.  Since 2005 China abandoned its fixed exchange rate policy and sharply revalued yuan from 8.3 to 6.3 per dollar. Very tellingly, the yuan has appreciated  strongly since 2020, ie in the midst of the largest ever USD printing in history, going from 7.2 to 6.4 per USD.

Unlike the Fed/ECB which maintain very negative real interest rates, PBoC's benchmark one year loan rate has been stable at 3.85% for over a year. Given China's inflation of 2.5%, real rates for CNY are currently well above those of USD and EUR.  In other words, it pays to hold CNY instead of USD or EUR - and that's one of the major requirements of a global reserve currency.

Back to how/when? Clearly, Chinese authorities must be worrying about the ultimate value of their massive US Treasury holdings.  Their exporters are selling enormous amounts of real goods to US and EU customers, only to receive (mostly) IOUs denominated in currencies that pay zero or even negative rates. How long can this continue? How long will China continue to, in essence, subsidize American and European consumers and governments? And, adding insult to injury, America in particular wants to impose trade restrictions, import duties, etc.

China's leadership may have viewed Trump as a loony outlier and waited him out, but it certainly cannot do so with Mr. Establishment Biden. Unfortunately, Mr. Biden is even more aggressive in deeds, if not in words, against China.  His trillions in new "liquidity", his plans for even more in the next few years and his Treasury/Fed's stubborn insistence on huge QE at zero interest rates must have Chinese leaders seriously concerned about the dollar's viability. Add that to being blamed (rightly or wrongly) for the COVID pandemic and the mix is getting highly toxic.

Bottom line: China could decide to pull the trigger at any time.  Yes, an Empire desires global stability above all else.  But first, it must rise to the top by toppling the previous one.  The US is currently asking for trouble by sticking to an incredibly irresponsible fiscal and monetary policy, well after the COVID emergency has passed.

So, this time around the Bubble is much worse because it comes with a very real possibility that its mishandling will end up in the Sudden Death of the American Empire.

One last note and chart.  The Fed’s overnight reverse repo reached a record $535 billion yesterday, thus removing almost 5 month’s worth of QE (currently at $120 billion/month).  In this reverse repo banks lend money to the Fed for 1-3 days (weekends are Fri-Sun) at a set 0% in exchange for Treasury Bill/Note collateral. 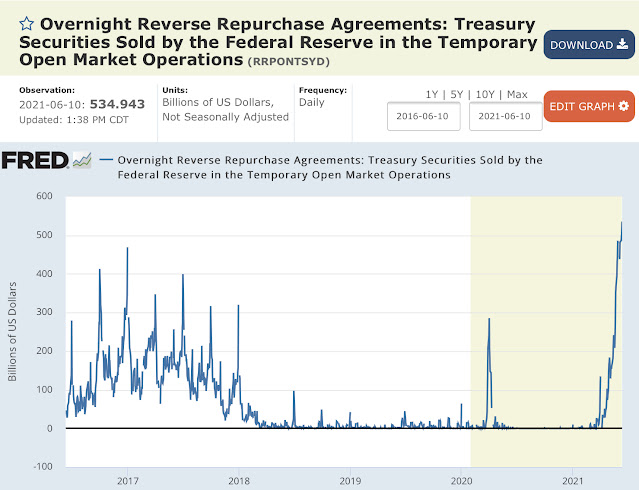 Banks currently have more money than they can - or choose to - profitably use elsewhere.. Where is such short term money usually lent to? The commonest and biggest user is the securities’ margin market, which trades on a “call” basis, ie it is due immediately on demand.  The current call rate is 2%, though very large brokers/borrowers may pay less.
For that $535 billion, therefore, banks miss $10.7 billion in annualized interest income by doing a reverse repo with the Fed at 0%.  That’s a lot of money to miss from their bottom lines, either because they have to (no borrowers) or because they choose to (risk aversion). Either way, the signal this is sending out is important - and it’s not about some temporary liquidity “imbalance”.
Posted by Hellasious at Friday, June 11, 2021