3Q GDP - Even Worse Than It Looks

GDP for 3Q21 was today reported as growing 2% (annualized), lower than expectations of 2.7%. Yet, the number was higher than the latest GDPNow estimate from the Atlanta Fed which was updated yesterday as 0.2%. That’s a pretty large error gap, right? Actually, it isn’t.

When inventory changes are subtracted the economy actually contracted by 0.05% - see below. Inventory numbers are notoriously inaccurate, so the FedNow estimate actually came in spot on, all things considered. 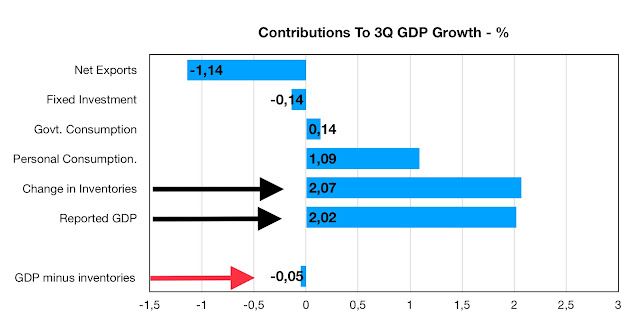 Analyzing a bit further, the government’s spending was erased by lower private fixed investment, while higher personal consumption was erased by the record trade deficit (negative net exports). We consumed more, but the increase was all made up of imported goods and services.

Moreover, what actually happened with inventories is that they didn’t build up from the previous quarter, but instead were drawn down at a slower rate, thus producing a sort of “phantom” positive effect on GDP.

Therefore, it looks to me that the US economy has stalled completely. With inflation at 5.4%, that’s stagflation..

Posted by Hellasious at Thursday, October 28, 2021