The Atlanta Fed has a mathematical model to estimate GDP on a running basis. It’s called GDPNow, and this is how it is described:

Good luck with that explanation if you do not have a degree in statistics. But you don’t need one if all you care about is its forecasting accuracy.

The current GDPNow forecast for 3Q2021 real GDP growth is just 1.3% annualized, way below the 6.5% expected by “blue chip” economists - see chart below.  This high number is what Wall Street is betting on as well, given the heroic equity P/Es. It is interesting to observe that GDPNow was also projecting a little over 6% growth as recently as late August, and then declined sharply within weeks. 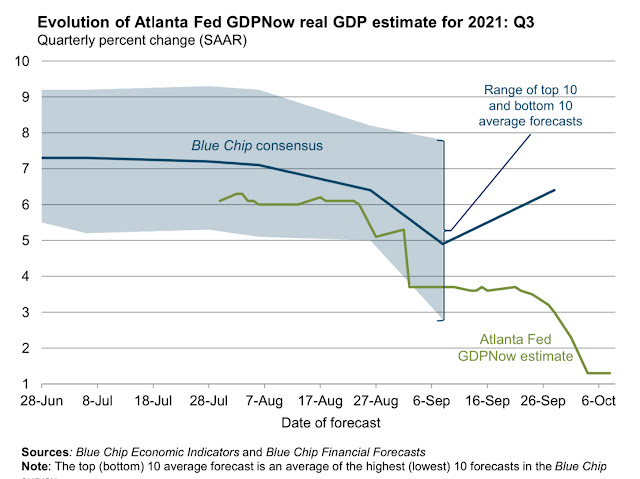 This is the detailed evolution of the GDPNow estimate:

So, just how accurate is the forecast? Excluding the COVID quarters which witnessed huge statistical volatility, the GDPNow model is very accurate, particularly nearer the release of the official GDP numbers - see chart. 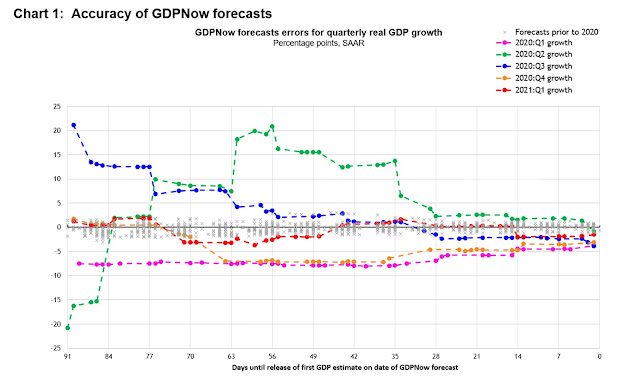 The Bureau of Economic Analysis will release its estimate for 3Q21 GDP on Oct. 28, just 13 days from today. Given the GDPNow track record above, it is highly unlikely that it will err by more than 0.5%-1% in either direction, thus producing an October surprise.