For a while now I have been thinking that we are living in a 21st Century dystopian version of the Gilded Age. Why dystopian? Because we get the Robber Barons, but not the rapid rise in workers' wages and higher living standards of the late 19th Century. Instead, we see the annihilation of America's once thriving middle class and its transformation into a Working Poor class.

The dystopia is even more obvious during the pandemic, which has upended American society  to a degree only now becoming more noticeable. For example, people are quitting their jobs in record numbers and job openings are the highest ever. 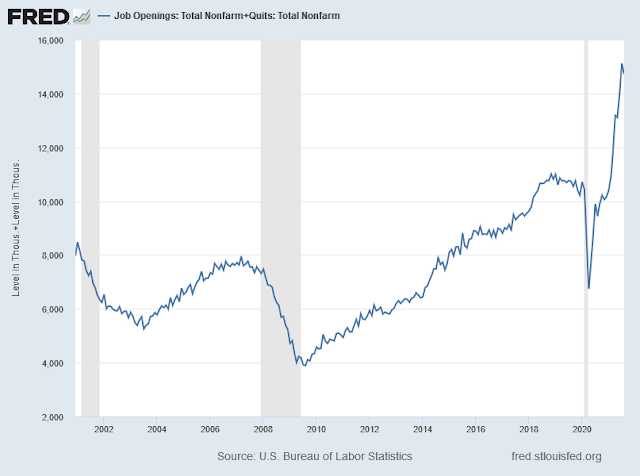 Sum Of Job Openings And Quits Hits An All Time Record

Doing a little more work with the data, I look at (Openings + Quits) as a percentage of the civilian labor force and compare them to the unemployment rate - see chart below 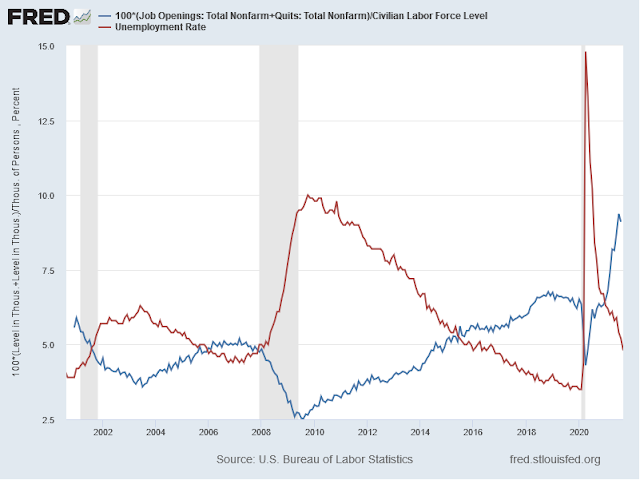 It is immediately apparent that openings and quits are much higher today than at other times when unemployment was similar as now - twice as high, in fact. It seems like the working class is revolting. Why? 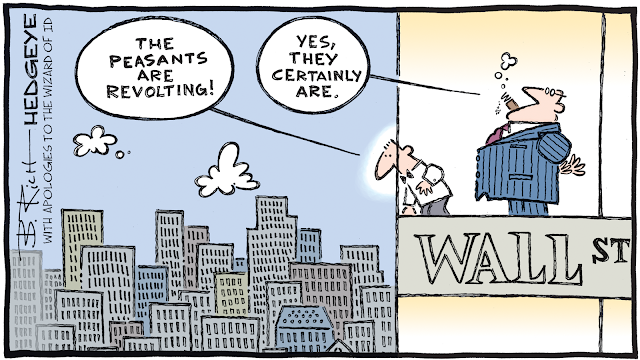 Several academic researchers are rapidly amassing hard evidence that workers are no longer satisfied with the quality of their lives, no longer willing to work  for low pay and no flexibility, no or very few essential benefits like healthcare and vacation, no job satisfaction, no time off to create a family... in sum, to live and work in America as opposed to, say, Sweden or even Canada.  They are quitting and not going back to work quickly, not willing to accept just any job.

This "wooly" type of economic data, much closer to psychology than econometrics, is routinely ignored, and even thought of as nonsense, by Wall Street, central bankers and even politicians. Yet, it shouldn't. After all, the 2017 Nobel Prize in Economics went to Richard Thaler for his work on Behavioral Economics.. His seminal  Misbehaving: The Making of Behavioral Economics is a must read for all who still operate under the delusion that our species is homo economicus.

In his book Thaler recounts a research presentation he made to professors in the psychology department of the University of Chicago. They were all dumbfounded that their colleagues in the economics department completely ignored the very basics of human behavior when developing their economic models. The two departments never consulted each other. Amazing, isn’t it?

Back to our version of the Gilded Age.

I am convinced that the current labor situation indicates a very deep level of popular dissatisfaction manifesting itself as a sort of workers' "flipping the finger" to the establishment.

The original Gilded Age ended abruptly with the market Panic of 1899 and the election of reformist Teddy Roosevelt as President. Ours…?

Posted by Hellasious at Thursday, October 21, 2021