Real, inflation adjusted wages in the US have been stagnant for decades, particularly for men. (The spike up during COVID is explained by the mass layoffs of  workers in the low-pay service industries like hotels, restaurants, etc. which brought up the average of those employed.) Even so, median wages are at the same level as 1979!

Is this about to change significantly? Perhaps yes.

Job openings (ie demand for labor) are at historic highs, while the number of people quitting their jobs (a measure of shrinking labor supply) is also at an all time high. 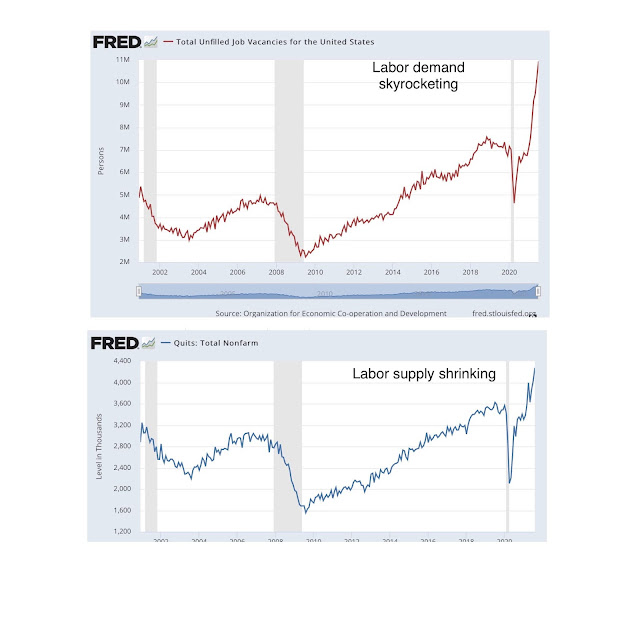 As with anything else, higher demand plus lower supply equals higher prices, in this case higher wages. But wages, unlike commodity prices, are “sticky” on the upside - you can’t have people working side by side doing the same job but getting paid different wages. That’s why we say that inflation gets “baked in” when it passes through to labor costs.

What is going on in China is another reason to expect, indirectly, higher US labor costs. Cheap imports were driven mainly by extremely low Chinese wages (“one bowl of rice”). That’s clearly over now:  Xi Jingping’s brand new “Common Prosperity” policy means living standards must rise for the working class, paid for by higher wages.  No longer will US employers be able to “import” China’s cheap labor, providing American workers with greater wage bargaining power.

Bottom line: inflation is not going away soon.