To paraphrase, nothing exceeds like excess.  In March 2020 the total market value of all cryptocurrencies was $141 billion.  Less than two years later, in November 2021,  it had exploded to almost $3 trillion, a 20-fold increase that was part and parcel of the “everything bubble” created by the printing presses of the Fed and ECB. 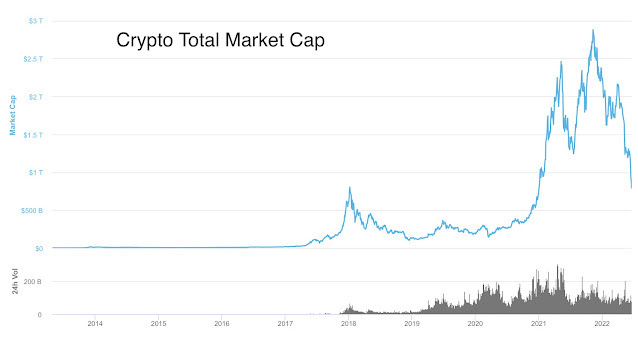 As expected, cryptos are now collapsing faster than any other “market” segment. Speculative frenzy has been replaced with fear, FOMO (fear of missing out) has become FOLIA (fear of losing it all).
Will the Crypto Collapse have consequences beyond its own backyard? Yes, of course: not only will it freeze risk appetite for everything (crypto has become a sort of mania weathervane), it will also create a cascade of cross-collateralization margin calls for all financial assets.  The crypto market capitalization at $3 trillion was just too big and juicy to ignore as a source of collateral to carry other positions in stocks, commodities, etc.
In a hypothetical case, a speculator who owned crypto worth $1 million could have used it as collateral to buy stocks worth as much as $1.8 million (90% crypto margin, 50% stock margin) - that’s leverage of 1.8X.  Worse yet, the $900.000 from the crypto loan could be used as margin to buy stock futures, thus raising the leverage to 14X.  But, it could be worse still: instead of futures, the wild-eyed speculator could buy CFDs (Contracts For Difference) where leverage can be as high as 50X.
It is all somewhat reminiscent of the derivatives’ alphabet soup in 2004-08, where huge leverage also wiped out hundreds of billions in “value”, initially starting from pools of speculative real estate and its associated mortgages.
The underlying, entirely false, assumptions for crypto and junk mortgages were  the same: real estate mortgages don’t default, and crypto is just as good as cash money in the bank - or even better. The reality is that they were both highly speculative trading sardines.
The crypto collapse is a catalyst accelerating events on the downside, so I won’t be surprised if I hear that some big names are caught in it.  El Salvador comes to mind…. I mean, can you just imagine? An entire country bought trading sardines, won’t  there be at least a few big institutions out there that bought them too? Or, as Warren Buffett puts it, as the tide recedes we will find out who’s been swimming without a swimsuit.
Posted by Hellasious at Sunday, June 19, 2022