US inflation came in higher than expected yesterday, shocking (why?) markets that were feverishly hoping for some signs of easing. Everyone is now expecting the Fed to raise rates more aggressively.  The projection is for Fed funds to reach around 3.00% by year end 2023. A good estimate is provided by the yield of the 2 year Treasury, see chart below.

Everyone is talking about interest rates, but they’re missing the forest for the tree.  The real issue today is money supply, and almost no one is talking about it - until very recently, that is, when Secretary Yellen vehemently denied that printing $$$^n and sending it out to every American was the cause of spiking inflation.   So, politicians are in full denial mode and are, thus, not helping in the fight against inflation.

Denial can’t negate the obvious fact that when you print trillion$$$ within months and give it out to every American for free, you will create inflation.  The more you print, the higher the inflation.  The evidence speaks for itself - see below. 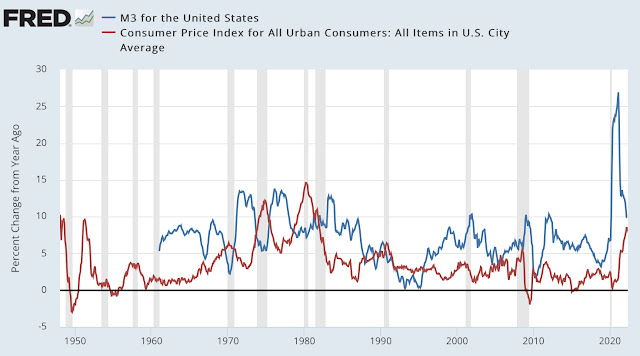 The remedy is equally obvious: cut money supply, and do it aggressively and fast, before inflationary expectations become entrenched into commodity pricing and labor cost expectations. Notice how M2 is still rising at a near historically high annual rate (10%) which in the past produced double digit inflation. Does anyone remember which number we all agonized about, every time it was released back in the late 1970s and early 80s? Yup, it was M2….

A corollary from the above is also about markets, particularly stocks, and memes like cryptos, NFTs, SPACs, and other such crazy-money “assets”: What the money high tide giveth, the low tide shall take away.