The world has experienced 40 years of almost uninterrupted asset appreciation.  From stocks and bonds to real estate and commodities, the overall trend has been up and up in a rally that has no precedent in history.  Some asset classes fared better than others, but  in general you could have thrown a dart blindfolded and still made money. Or, have a monkey choose for you with the same result.

Sure, some asset managers did much better than others: it is hard to argue against the genius of Warren Buffett, for example.  Then again, how would he have done against a backdrop of a decades long bear market? As he likes to say, it is when the tide goes out that we see who’s swimming naked.  Another way to say it, a rising tide lifts all boat. Yet another, don’t confuse brains with a bull market.

Enough with the platitudes, on with facts. Let's look at all major investment categories: 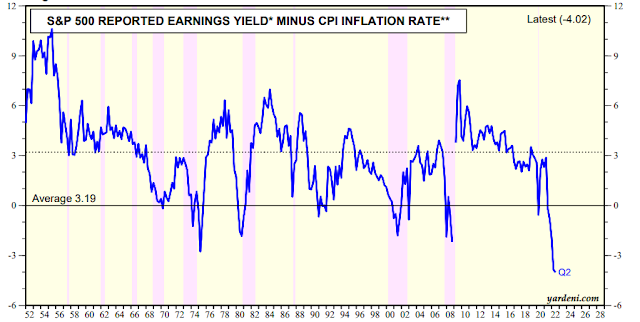 Inflation-Adjusted Earnings Plunge To Most Negative In History

Housing Affordability Plunges The Most Since 2007

Freightos Global Container Freight Rate Index Coming Back To Earth
Am I leaving an investment category out? Precious metals, perhaps? No, they are commodities.  Diamonds?  Surely, they are a girl's best friend but I can't really call them investments in the traditional sense.  Likewise for art and wine - unless you mean "investing in the finer things in life", in which case they are always investible!!
After decades of ever higher returns for all asset classes, they have now all become un-investable when assessed against current economic reality.  And I haven’t even mentioned geopolitical risks, which are rising daily.  Our asset universe has become un-investable: no matter how carefully you throw your dart it is more likely than not that you will end up with losses and, as I projected in my previous post, those losses will persist for a long time.
Posted by Hellasious at Saturday, September 03, 2022