LDI: Do They Ever Learn? - Or Is It Plain Old Greed?

Remember my UK Plunge Extra post from just a few days ago? Told you so….

This blog was one of the very first to point out the risks inherent in CDS going back as early as 2007.  We know what happened afterwards.  Let’s be absolutely clear: there is ZERO fundamental need for CDS, or a plethora of other such financial market derivatives. In fact, instead of reducing risk such derivatives BY DEFINITION increase systemic risk because they introduce at least one (and frequently many more) extra counterparties to the equation: the issuer(s) of the derivative(s). Just Google “AIG CDS credit crisis” and my point becomes clear.

After the CDS meltdown in 2008-09 one would think that the market learned its lesson: Derivatives are dangerous, no matter if they dress in sheep’s clothes. But no, the lesson hasn’t been learned.

The newest culprit is called LDI, an innocuous enough strategy of Liability Driven Investing targeted mostly at corporate pension funds. As a pension fund manager you have a known future liability stream X to pay pensions, medical benefits, etc. , and current assets of Y.  Unless you work for Norway or Qatar, you have a definite mismatch problem, which ultimately boils down to this: you can’t possibly predict the far future.

Enter your friendly investment bank/pension consultant who offers you an investment strategy called LDI purporting to solve your mismatch problem.  It involves an array of derivative instruments, of course, but hey,…. It sounds good, right? Give them your money, toss the Bloomberg terminal password into the drawer and head down to the pub for a few. Problem solved.

Riiiiiiiiight….. until the (not so) unthinkable happens and a new PM decides to go for a massive unfunded tax cut and absolutely destroys the gilt market. The LDI derivatives go underwater and scream for additional margin money.  Which, of course, you don’t have unless you sell gilts or other such in order to raise cash, which pushes prices down, which creates more margin calls. Same old, same old… time and again. 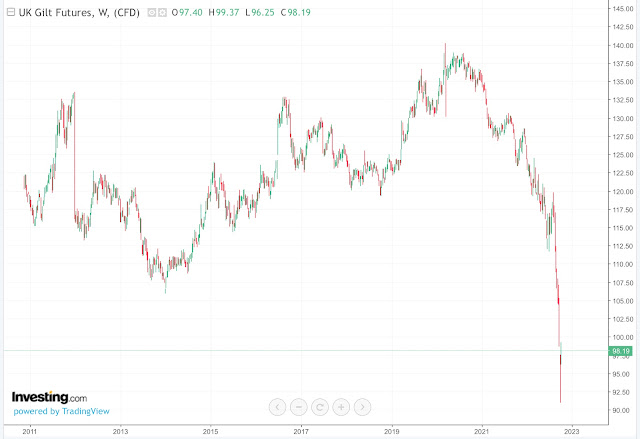 Why do they come up with this stuff, you ask? Why not stick with plain old long government bonds? Wanna know the truth? Because there’s no money in it for anyone. Plain bond trading commissions are almost zero, and so is managing portfolios of such plain vanilla stuff.  But OTC derivatives are opaque and carry hefty fees and spreads. In a word, it’s greed dressed up as “innovative” finance.

Why does LDI exist in the first place?

Regulators started requiring corporations to carry unfunded future pension liabilities on their balance sheets, first in the UK and then in the US - and properly so. Obviously, companies hate this because it destroys their valuations.  And many companies, particularly older ones, have very sizable unfunded liabilities.  Enter your friendly banker who sells you a bunch of swaps that “hedge” all or part of your liability, thus reducing or even eliminating the hit to your balance sheer. Problem with hedging with derivatives is that they may hedge the future all right,  but they require margin today, so when the doodoo hits the fan you end up getting squeezed cash-wise, today. And, of course, you counterparty risk has increased as well.

3. A hefty upfront fee, included in the price of the swap

Doesn’t sound too attractive to me but, hey, PT Barnum had something to say about it.

Not surprisingly, the LDI business is now huge, growing from zero to $4 trillion in less than 10 years, globally.  Half of this amount involves UK pensions alone, ie a whopping 65% of UK GDP. Explains the gilt and sterling disaster last week, doesn’t it? It also explains why Truss & Co today backtracked on their I Love Maggie tax cuts. (Note: it’s a tiny backtrack, it involves only 2 billion out of a 45 billion program).

This episode of Greed Is Good is very far from over, I think. Stay tuned.