Consumer spending accounts for 68% of US GDP, so as the consumer goes so goes the economy.  In the last 10 years consumers saw their debt service payments go down very significantly as interest rates collapsed to near zero;  as a percent of disposable income household debt service in 2021 fell to near 8% from a high of 13% in 2008 (see chart below - blue line).

This allowed consumers to boost spending on other items (eg streaming services) and, importantly, created a massive pool of money available to drive individual speculation in anything from meme stocks, cryptos and NFTs to index funds. 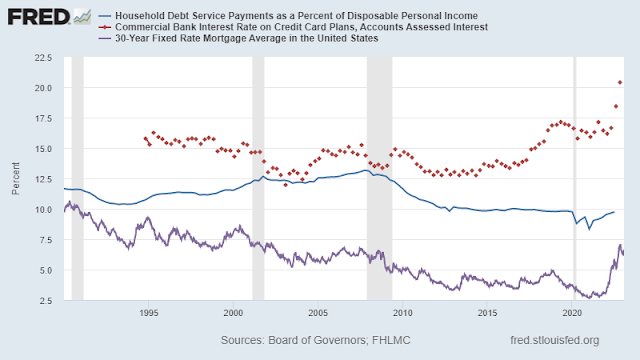 With interest rates now soaring this process is reversing.  Mortgage rates have jumped from 2.5% to 7% and credit cards from 16% to 21% (see chart above - purple line and red dots). Data on debt service lag by at least a quarter, so it cannot be seen on the chart, but it is certain it will jump to at least 11-12% of disposable income.  Notice how such levels were previously associated with recessions (grey areas on the chart).

Despite inflationary headwinds, overall consumer spending has remained relatively high, likely because employment is still very robust and wages are rising.  Also, household debt is still pretty low compared to 10-15 years ago, so adding debt may support spending.  But this can't last; the first signs of retrenchment are already visible, mostly at the loony edges of speculation.  Will this transit to other, conventional areas of consumer behavior?  I think so - big layoffs at Amazon, Meta, Spotify, etc. can only be explained in the light of lower household demand.  Likewise for Tesla's reduced prices.

Lower consumer spending = lower GDP = recession/zero growth.  After 4Q22, which may come in surprisingly higher than most think (Atlanta Fed GDPNow is projecting +3.5% vs market expectations of +1.5-2.5%), the consumer and the economy will have to deal with serious headwinds, debt service being a major issue.  Markets don't seem to take this into account and are back on their "risk-on" mode.  Even loony stuff is jumping - a pretty sure sign that speculators are back into action.  I believe they will be proven wrong.