What do the following charts have in common? 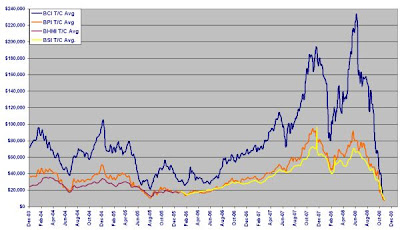 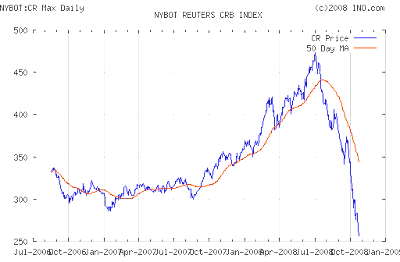 A commodity bubble was fueled by massive amounts of liquidity (aka debt) that was available (aka issued) during the past few years. While the speculative frenzy was going full blast, traders were tempted to keep large and growing stockpiles of everything from coal and iron ore to wheat and soybeans in order to make large capital gains. This produced increased pressure on transport demand, particularly for the largest vessels possible (Capesize). Incremental boat supply being particularly slow to materialize - unlike, say, CDOs - charter rates went through the roof.

But when the credit bubble popped, everything else followed, too: the dominoes fall with great speed in our globalized world. So, don't look for charter rates to recover materially until stockpiles are worked down and fundamental physical demand (i.e. consumption) comes into line with commodity production rates.

Posted by Hellasious at Saturday, October 25, 2008