The Fed is planning to cut rates by another 50 bp (0.50%) this week, bringing their target for Fed Funds down to 1%.
Wonderful.. and how is that going to help, exactly? I mean, help the so-called "real" economy and not the panicky, tormented souls of financial regulators who are grasping at any blow-by straw to make them look like they are "doing something". 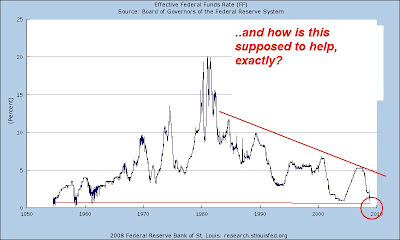 Official rates are already so low that another half of a percent will do absolutely nothing to ease the huge debt burden crushing the US economy. An economy that in recent years willingly (or was it, in fact, forcibly?) abdicated its position as a premier manufacturer and heavy duty productive user of capital. Lowering the cost of borrowing would be great - if there were thousands of healthy businesses eager to borrow and apply the funds to new plant and equipment, to hire new workers and to fund research and development. But, there aren't - that was last century's economic model.

Today we are captives of the Asset Economy, the FIRE Economy, the On-Margin Economy, the Capital Gains Economy, the Debt-Above-The-Eyeballs Economy. What productive use of capital are we talking about now, for heaven's sake?

So what are lower rates supposed to do? Hope that millions of low income Americans will suddenly rush to buy new houses, putting themselves into more hock than they are already? Charge more Christmas trinkets to already maxed-out credit cards and hope the devil doesn't care? Induce hedge fund managers, who are staring hundreds of billions of liquidations in the face, to rush out and buy more stocks on fresh margin? Make insurance companies underwrite more disastrous credit default swaps?

None of the above, of course. The upcoming cut, which will very likely be coordinated with other central banks around the world, is a shameless political move designed to palliate the voting, but unfortunately clueless, public. Nothing more - and nothing less, in this political season that is threatening to deal a crushing blow to the (clearly outgoing) Republican party.

One more time, then: what we need is LESS debt and not more, or cheaper, debt. Cancel it, destroy it, bankrupt it, wind it down, liquidate it - call it what you may, but the end result must be the same. A saner ratio of debt to earned income.

How to do it? Rational , thinking people may come up with a variety of ways; mine have been stated over and over again:
I'll borrow a line from Thomas Friedman's new book Hot, Flat, and Crowded. He's quoting John Hennessy, the president of Stanford University: "Today's energy-climate challenge is a series of great opportunities disguised as insoluble problems."

What a great way to view our world and its challenges. Instead of silly, worthless rate cuts..
Posted by Hellasious at Monday, October 27, 2008