End of An Era

Retail sales for the month of December were announced yesterday. The number was much worse than expected, creating a rather severe reaction in Wall Street.

Or is it Wall Alley, these days? Merrill's thundering herd has been reduced to a wimpering clutch and Smith Barney's owner (Citigroup) doesn't seem able to earn it "the old fashioned way" and must sell it to raise cold hard cash. Sic transit gloria mundi, indeed... I point those two investment banks in particular, with not a little sadness, because they were my employers for a considerable number of years, way back when...

Anyway, back to retail sales. They certainly do look sick (see chart below). 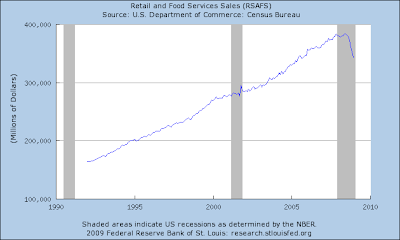 Nevertheless, we must take into account the fact that gasoline prices have tumbled sharply in recent months and thus influence gross numbers more than usual. Here is a chart that compares total retail sales (red line) with sales excluding gasoline stations (blue line). Still pretty bad, but not as horrible as the headline number. 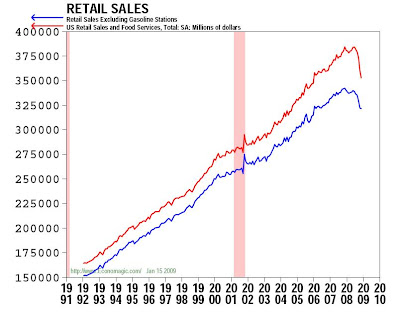 Nevertheless, the break in the trend is significant - unprecedented, even, in our modern-era consumer society. It remains to be seen if it marks a tectonic shift away from the vicious debt-induced Permagrowth cycle (borrow-consume-borrow), towards a more benign Sustainable paradigm. I believe it does - mostly because I hope so, but also because I can recognize from history certain signs common to all "end-of-an-era" periods.

Yes, most people may wish the party to go on, but deep down they know it's over. And this knowledge affects their behavior very significantly. When it's over, it's over.
Posted by Hellasious at Thursday, January 15, 2009