A friend from the broker community called me a couple of days ago and asked me what I thought about the dollar, i.e. its value against foreign exchange (in this case the euro). I replied that I was pretty much a euro/dollar agnostic these days, but that my gut told me the dollar would appreciate against most major currencies. My view surprised her because her first take was that the US needs to keep the dollar low to boost exports and thus help revive the economy .
I don't disagree on the need for exports, but my analysis is based on another, much more pressing need. With $1 trillion plus budget deficits projected for several years, the US must sell a record amount of bonds to cover the gaps. Who will buy them?

Domestic investors cannot raise the money. If the personal saving rate was to rise to 5% of disposable personal income (see chart below) - and stayed there - the amounts involved would be less than one half of what is required to finance the deficits. And even this assumes that all savings would go to US Treasurys - a completely unrealistic expectation. 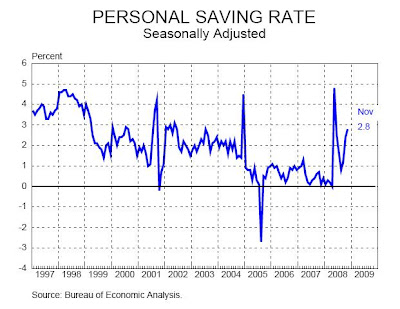 So, a very large amount of bonds will have to be purchased by foreigners, many of whom have fiscal problems of their own, right now. How to make US bonds attractive to them? For a foreign investor, total return on dollar-denominated bonds comes from three sources:

Let's look at each one..

Now, I'm not talking about a "zooming" dollar, you understand. But even a 5% "steady" appreciation against, say, the euro would make US bonds quite a good proposition for a foreigner in this environment of limited investment choices.
Posted by Hellasious at Friday, January 09, 2009