No matter how you interpret it, the recent plunge in margin debt in the US is thought provoking (see chart below). 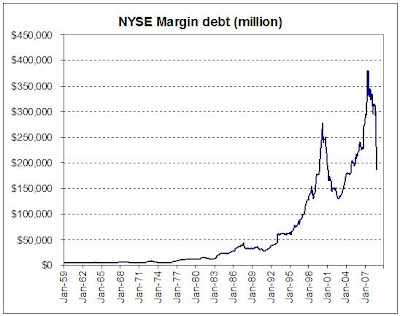 Latest data from NYSE show a vertical drop: from a high of $381 billion in mid-2007 to $186 billion in December 2008, with most of the decline occurring in just the last three months. Margin debt has likely declined even further in January and February. De-leveraging writ very large, indeed.

For a more instructive longer-term perspective it is better to look at a log-scale chart (see below). 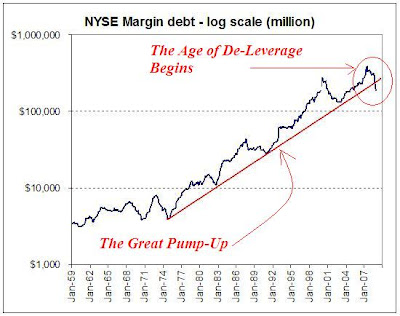 One (fundamental) interpretation is that The Great Pump-Up, which lasted over thirty years, is finished and the Age of De-Leverage is fast upon us. Though I don't expect the latter to last as long as the former (economic declines being swifter than expansions), I nevertheless think that the de-leveraging process will last more than most people believe. And this, despite the (un)heroic efforts by Fed and Treasury to rapidly pump trillions of fresh debt into the system. All they are achieving so far is to replace a portion of the debt going terribly bad (eg sub-prime mortgages and speculative trading leverage) with government debt. Unfortunately, private debt is rotting away much faster than the feds can replace it.

I wonder.. When will the people of the new Obama administration cotton on to the simple fact that the whole debt-fuelled Permagrowth structure is rotten, not just one small portion of it? When will they wake up and realize that Bernanke, Paulson & Co. (and now Geithner) are not providing fresh solutions, but simply making the old problems even worse?

C'mon folks, PLEASE! Step out of the box and look at things from another angle. Whatever you think, dare to think the opposite. For one, stop comparing today with the Great Depression - that's a ridiculous, fear-mongering scare tactic used by the finance community to convince the public to supply bail-outs by the trillion.

Today's US economy bears no resemblance whatsoever to the 1930's. Capital and labor intensive industries like manufacturing and farming account for a far smaller portion of GDP and the social safety net is much bigger (deposit and pension insurance, Social Security, Medicare, food stamps, etc). It's the debt-laden asset-based FIRE economy which is in deep trouble today and it should be allowed to shrink back to a relative insignificance.
Posted by Hellasious at Friday, February 27, 2009