The following data on CDS (Credit Default Swaps) amounts outstanding is not exactly fresh (latest available are from June 2008), but it is relevant to what was just announced by AIG - and apparently precipitated yesterday's steep drop in global equity markets. 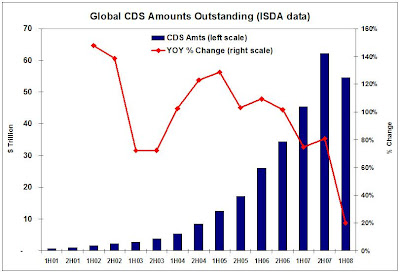 The world's erstwhile largest insurance company lost a record-setting $61.7 billion in the last quarter. It comes as no surprise to yours truly that most of the losses were attributed to CDS contracts. Readers will recall that I have long been beating the drum on the terrible consequences of unchecked issuance of credit insurance. In a nutshell, I had pointed out that enormous CDS exposure would act as an accelerant to a financial meltdown, despite the frequent and voluble objections that "these are just notional amounts and the real exposure is much smaller."

Well... size does matter, ladies and gentlemen. Because the proviso, that little asterisk attached to or implied in all the objections to my warnings, was always the same: assuming counterparty risk is not increased. That's a bit like saying that cigarettes are completely harmless as long as you don't smoke them. Or, they are almost OK if you don't inhale.. As I am fond of saying, good luck with that (nonsense).

Reality has now hit us on the face like a baseball coming off a bat - and it has "Mfg. by CDS Industries, Inc." written all over it. Make no mistake: such derivatives, plus the second- and third- order artificial products manufactured from them, are the proximate cause for the seizure suffered by the FIRE economy. Simpy put, everyone is scared witless not only of their own but, most crucially, of everyone else's exposure to this stuff. That's counterparty risk, big time.

There's one silver lining, however: such derivatives are typically structured to last five years and we are already well into the second year of the crisis. Meaning, amounts outstanding - and the dangers associated with them - are coming down fast. There were nearly $8 trillion less CDS outstanding in mid-2008 than at the end of 2007, a 12% drop in six months. I am certain this process has accelerated sharply in the last nine months, as risk and leverage appetite has quite obviously turned into revulsion.

So, just like plunging margin debt (data in the previous post), the drop in CDS is a sure sign of rapid de-leveraging happening as we speak. I think its a very good sign, all things considered..

Now, if we could just get through the next year without any huge implosions... (note: I think we will).
Posted by Hellasious at Tuesday, March 03, 2009