Over There, Then And Now

Just in case anyone thinks the grass is greener over yonder, i.e. across the Atlantic Pond (globalization having shrunk everything in size), here is an article by The Telegraph's eminent Ambrose Evans-Pritchard to remind us that "sudden debt" was how the world bubbled its economy to the bursting point. And the consequences.

Scary read to be found here: Failure to save East Europe will lead to worldwide meltdown.
We see that "in Poland, 60pc of mortgages are in Swiss francs. The zloty has just halved against the franc." How about that? By comparison, US sub-prime loans appear almost benign and boring.
And.. "Austria's finance minister Josef Pröll made frantic efforts last week to put together a €150bn rescue for the ex-Soviet bloc. Well he might. His banks have lent €230bn to the region, equal to 70pc of Austria's GDP."
I should remind everyone that after the 1929 stock market crash the global economy seemed to hold together - for a while. It was not until 1931 and the collapse of an international bank that the entire world spun into the Great Depression. Location of said bank? Yes, Austria*.

From today's stock market perspective, however, it is troubling that we have not yet seen any significant rebound from November's lows. The market is just going sideways, in a rather tight range. 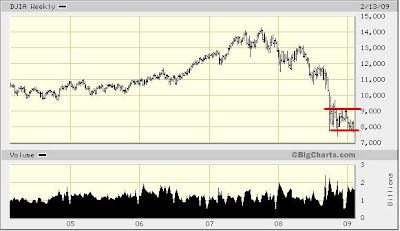 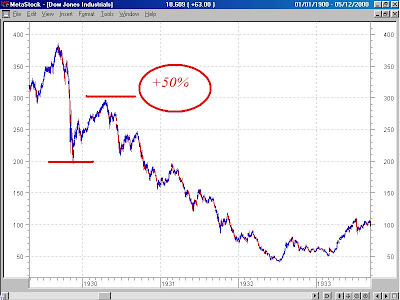 DJIA 1929-1933
Which begs the question: is today's market action discounting the past (i.e. being scared of a repeat Great Depression) or is it discounting the future (i.e. hoping for a rather swift economic rebound)? I think it is doing both, which is why it is range-bound for nearly four months. Simply put, even professionals have no idea whatever which way the market will "break" (up or down) and are thus sitting on their hands.

Think deer, headlights, truck. But will the truck hit the long-horns or the short-horns? Beats me. But there IS an alternative possibility, derived from the maxim that "the market strives to make fools of the largest number of participants possible": the truck is stopped, albeit with the lights on. Oh dear...

In that case we will just have to scrape a living by selling volatility to both long- and short- horns.

* The Creditanstalt Bank failed in May 1931. It was closely linked to the global Rothchild network.
Posted by Hellasious at Monday, February 16, 2009