Just about every civilian (i.e. a non-finance professional) thinks that a Crash is the way to send financiers to the poorhouse en masse. Wrong - just as it is completely wrong to think that casinos go bust because too many people win. The truth is, of course, completely different.
The FIRE Casino (finance, insurance, real estate) feeds on the Two Vees: Volume and Volatility. Thus, it goes bust only when no one wants to play, when the market is flat and volumes shrink. This hasn't happened in a long, long time. The last time, when brokers became cabbies, was the 1970's. The Dow literally yawned its way through that entire decade, fluctuating a mere 100 points around the 900 mark (with one exception - see chart below). 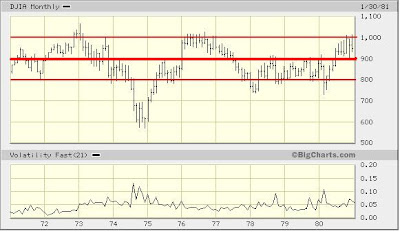 You see, the house doesn't really care about "How The Dow" (though it does prefer it to go up because it then captures the hoi polloi's imagination and induces more participation by the marks - remember dotcom daytraders?).

As I said, market makers feed on volume and volatility, not direction. And there's the rub: so far volatility has been immense and volumes quite strong - at least in equity markets. The prediction, therefore, is that this whole crisis thing won't be over until ... you guessed it... volatility drops sharply and volumes tank - and cab companies get job requests from unusually well educated applicants.
____________________________________

Note: I'm off on business for a week (green business, by the way) and will try to post ad hoc.

Posted by Hellasious at Tuesday, February 17, 2009