CDS As Money In The Shadows

As of today I have changed the masthead of the blog to reflect my growing interest in monetary economics which, quite obviously to me, is at the very heart of the current financial crisis. There are certainly other critical influences shaping events (climate change, resource depletion and geopolitical tensions are foremost) but money clearly matters the most, day-to-day.
In fact, one could argue that every human activity ends up being factored into and reflected as money flows. If energy flow is the real (i.e. physical) manifestation of human activity, then money flow is its metaphysical - one could even say philosophical - equivalent. The funny thing about money is that, though it is ''unreal", even kids have a feel for it in daily transactions, whereas the "real" energy is completely nebulous in peoples' minds.

And yet, as befits any philosophic entity, few have a clue about what truly constitutes money - and this includes many so-called professionals. Most just think of money as currency in circulation: dollars, euros, yen and rubles in their pockets or in banks' vaults. Some take a further step and include deposits in banks, properly understanding them to be mere book entries. But it is very few who make the mental leap required to properly view debt as money - indeed, the very idea is antithetical to "common sense".

And yet, that's exactly what our current, fiat-issue money is. The acceptance of new debits (debt) by those willing to assume them creates equivalent new credits (money) and presto, new money is created out of, literally, faith. To paraphrase a familiar text:

I am sure that longtime readers of this blog are already familiar with all this stuff, Christian Credo in Latin and all. So I wrote the above as mere preamble to today's "out-of-the-box post".

The idea hit me as I was thinking more and more about CDS (credit default swaps) and their role in today's mess. I was quite surprised by Mr. Bernanke's repeated comments on how "angry" he was at AIG and their ruinous exposure to the CDS market. Now, a Fed chairman - the person most responsible for controlling our money - doesn't get "angry" in public, unless he has a very, very good reason and/or a serious point to make. To continue in the same vein as above, it's a bit like the Pope publicly denouncing one of his most important cardinals.

Because AIG and all other major CDS players did something very unorthodox, heretical even. They assumed monetary powers above and beyond those of a mere financial acolyte: they created money without having to submit to the prior omnipotent authority of the Fed.

I have previously discussed CDSs acting as phantom equity equivalents. But can they also be viewed as phantom money - indeed, very high-powered money? Yes, they can - and that's a key element to what has become known as "the shadow banking system".

The issuance of CDSs created obligations to pay pre-determined sums every year for, typically, five years - i.e. debts. They were created out of thin air and required no reserving at the Fed or anywhere else. There was no taxation, wage income, rents, mine output, oil wells or anything else tangible backing those debts. So what backed them? Faith, pure and simple. That's as close as we have ever come to creating the absolute faith-based financial instrument. The Dutch, those early tulip-bubblers, knew a thing or two about such instruments: windhandel they called it, or trading in wind. 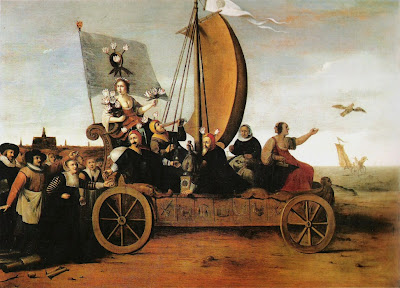 A CDS Party Carried In The Wind
Flora's Wagon of Fools by Hendrik Pot (c. 1637)

There are several important observations and corollaries that can be drawn from viewing CDSs as uncontrolled money creation (see chart below). I will leave them to readers by posing this question: as CDS amounts outstanding now crash down through a combination of expiration, forced migration to regulated exchanges and negotiated settlement, what is the effect on money supply, the prospect for inflation/deflation and asset prices? 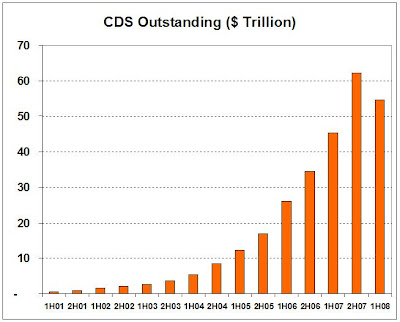