I just read an article in Reuters about what President Obama should do to get the economy "back on a solid footing". Here's their analyst's advice: "...convince Americans to spend now and save later.." Wow! Talk about living in a shelterd past under a shaped Shrub..
Yeah, sure - let's all go shopping in the face of adversity; and this will boost GDP, jobs, income, asset prices and - of course - the ability to borrow ever more to keep the Permagrowth cycle going for ever and ever. Some analysts' thoughts never break free from Groundhog Day, do they? - no, scratch that: most analysts never do. Their exhortations to spend, spend, spend (more accurately: borrow, borrow, borrow) are based on the religious conviction that the world knows no physical boundaries, that resources are supplied as needed because we just demand them. It's only a matter of Adam Smith setting appropriate scarcity prices by His Invisible Hand, don't you know?

But, you know what? Forget the big picture for a moment. Let's just only look at the personal saving rate. Does anyone have any doubt that saving less and less, until America's households began to liquidate savings to consume, was a major underlying cause of the current crisis? 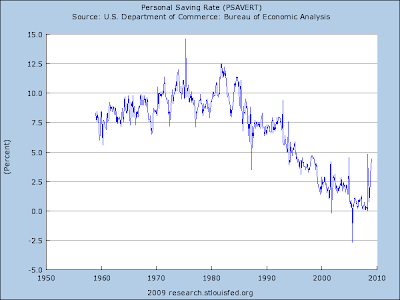 Oh, but I forgot: the New Economy and technology will save us. More strawberries and cream will appear just because we sell more tickets to Wimbledon through the Internet. Truckloads of lumber and pails of nails shall materialize at building sites because the house was designed by AutoCAD instead of pencil and paper. Ahuh..

And dollars will rain down from helicopters to pay for all these, people merrily collecting them in baskets (or is it wheelbarrows?) to exchange for such trifles as food, clothing, fuel and shelter. Oh yes, and spaghetti grows on trees, so if you believe any of the above just "place a sprig of spaghetti in a tin of tomato sauce and hope for the best".

But if you do not, do the exact opposite of what Ms. Emily Kaiser (the Reuters analyst) suggests. Save now because the borrow-spend-grow paradigm is shifting fast. How do I know? Because Mr. Obama says so, and he is the President of a country that accounts for a quarter of the world's consumption. Here's what he just said during his trip to Europe:

"In order for growth to be sustainable, it can't be based on speculation, it can't be based on overheated financial markets or overheated housing markets, or U.S. consumers maxing out on their credit cards, or us sustaining nonstop deficit spending as far as the eye can see. The whole point is to move from a borrow-and-spend economy to a save-and-invest economy."

Listen to the man. Oh and I trust that Michelle is not planting spaghetti trees in the back of the White House, either...
Posted by Hellasious at Wednesday, April 08, 2009