The debate rages on in the financial blogosphere: will the current crisis ultimately be resolved through a period of cataclysmic deflation or in a hyper-inflationary auto da fe, Weimar-style? (Typical of human reactions when emotions run high, very few talk about middle-of-the-road alternatives.)

What do I think? First, some background to set the stage.

In the past few decades we experienced rapid asset inflation, combined with relatively mild consumer price inflation. Many perceived this to be a good development - and up to a point it was. After all, who doesn't want to see their wealth increase while paying low prices for goods?

Trouble is, you can't have it both ways for too long because asset prices must reflect a reasonable multiple of the income they produce ("rents"). Income derived from assets must be high enough to provide a competitive current return and to offset the risk of holding them. That is to say, dividends from shares, interest from bonds and rents from real estate must have reasonable yield ratios.

How do we know when assets reach unreasonable levels, i.e. how do we define a bubble? Greenspan claimed that it was impossible to do so and that we could only identify bubbles after they burst. Obviously, I disagree.

Apart from observing crowd psychology (i.e. maniacal behaviour), I believe the best fundamental indicator of a bubble is the relationship between earned income and debt. Don't forget that asset prices and debt levels are opposite sides of the same card: it takes lots of "money" (debt) to inflate asset prices. Debt, on the other hand, must be comfortably serviced out of earned income: wages, salaries, etc. When the two are considerably out of balance then the debt-asset bubble must and will pop.

Furthermore, things get really ugly when debt and asset prices rise very fast, as happened after 2000 (i.e. Sudden Debt). Earned income then has no chance to catch up to debt in an orderly fashion and the result is debt default and destruction, with a commensurate plunge in asset prices. That's exactly what is going on right now, of course.

Let's look at this relationship more closely. Below is a chart indexing home prices (Case-Shiller National Home Index), share prices (S&P 500), average hourly wages and household debt per working person. Obviously, assets and debt got way out of balance against income, particularly about 10 years ago. 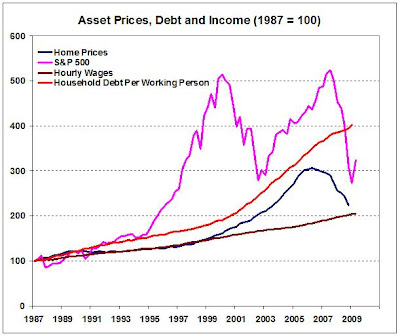 High Debt + Low Wages = Asset Deflation, Eventually (Data: FRB St. Louis, S&P, BLS)
Notice how asset prices have now corrected to a significant degree, but household debt still remains high. That's because the Fed and Treasury are furiously pumping in public debt into banks' balance sheets to avert (and mask) household debt defaults. But this is a fool's errand: in the end all debts, private and public, must be serviced out of earned income. And since income is extremely unlikely to rise suddenly, debt must also come down, sooner or later.

A few months ago this blog's masthead used to proclaim: "We hold this truth to be self-evident: We cannot solve a debt crisis by issuing more debt". By definition, therefore, the only way to resolve this crisis is to allow debt to be destroyed in as orderly a fashion as possible, taking as long as possible in order to avert social consequences.

My view, thus, is that we are in for a long period of persistent asset/debt deflation that will eventually bring debts and asset prices into closer balance with incomes. At least that should be the aim of our policy makers. But, truth be told, I am not sure at all that they see things this way...