One morning, when Uncle Gregor Samsam woke from troubled dreams, he found himself denuded of all his weapons and munitions. His vast armies were no longer in uniform and did not acknowledge or follow any of his orders. His own currency, which he used to buy a huge array of imports and maintain an enviable lifestyle, was no longer accepted by his trading partners who, instead, demanded valuable goods in exchange. 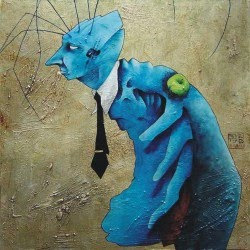 Gregor Samsa by Migvel Tepes
The illusion of global power can become a "Metamorphosis" of harsh reality very quickly, indeed. Just ponder the abrupt extinction of The Bug, genus Sovieticus and the collapse of its associated aphids, once crawling madly about its anthill.

And presently we have come to an extremely difficult choice for Messrs. Obama and Bernanke: Should they (a) quickly restore fiscal and monetary sanity, albeit at the cost of prolonging the economic contraction and its deflationary pressures, or should they (b) continue to pump "air" dollars (windhandel) into a world that is increasingly questioning their worth as a global storehouse of value?

This is no small matter, for it is the ability to issue readily accepted dollars into the global economy that has allowed the United States to maintain its empire and a very high living standard, despite astonishingly foolish behavior from its leaders. This became very clear during the eight years of the Bush II administration, with such astonishing pronouncements as: you're either with us or against us, go shopping, etc. The world did not completely disavow the dollar then because it believed that Americans would eventually see their error and shift to a more rational course*. Perhaps that's another reason why Mr. Obama was greeted with enthusiasm and hope from the entire world, financiers included.

The time has come for us to show the world that we mean business, that we mean to put our actions where our (very big) mouths are and to keep our promise that we shall make good on the flood of IOUs we so recently issued. I, for one, would rather see a policy of radically shifting our economy towards the German or Danish model, with all the associated pain this would entail for the present generation, rather than bequeathing my children with the ruins of a collapsed Dollar Empire.

The time to act is now and the way forward is known: get as far away as possible from debt-induced maxi-consumerism and, instead, save to invest in a rationally sustainable economy. Create alternative energy sources and networks, transportation systems, organic/responsible farming, arrest environmental destruction.

Otherwise, I fear, choice (b) may result in a Kafkaesque nation: Amerika.