Regular readers know that I am a "deflationist", i.e. I believe that the current Great Recession is already characterized by asset and credit deflation, which will likely deepen and widen further before the global economy rebounds.

Needless to say, this view is not shared by several academic analysts and gold-standard theorists - and most definitely not by commodity speculators who, however, are mostly talking their "book". Some even mention the possibility of hyper-inflation, a la Weimar Republic.

For everyone's consideration, then, here is another piece of the puzzle: foreign/international holders now own $3.5 trillion of Treasury debt or 50% of the total, up sharply from $1.06 trillion and 30% in 1999 (see chart below, click to enlarge). 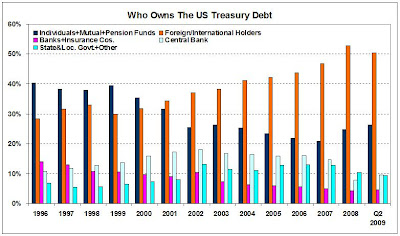 Data: SIFMA
You Wanna Do What To My Money?
The simple point is that powerful foreign creditors, e.g. China and the oil Arabs, now stand to lose a serious - record breaking serious - amount of money, should the US go down the inflation route to rid itself of onerous debt. It follows that they will not sit idly by, looking at their savings turn into so much dust in the wind (do I hear "oil embargo"?).

Judging from the increasing noise emanating from places like Beijing and the Gulf about dumping the dollar as the major global reserve currency, the Obama administration is clearly being sent overt warning messages. Happy hour at the bailout saloon should come to an end, they seem to be saying. Stop serving out the monetary booze and concentrate instead on bringing back a semblance of normalcy in interest and FX rates.
Posted by Hellasious at Thursday, October 15, 2009