It's The Banks (Plus Kissinger On The Dollar And China)

If you are wondering what lead the recovery of broad stockmarket indexes, look no further than the chart below (click to enlarge). A comparison of relative performance between S&P 500 (yellow line) and the KBW bank share index (black line), it shows that banks rose almost three times faster, since the market's nadir in early March 2009.

BKX +160% vs. SPX +60%
The reason for such outstanding performance is quite simple: Washington's credo of "too big to fail", i.e. trillions in public bailout money. Once it was fully understood just how far the Fed and Treasury were willing to go to prevent "our crowd" finance from going under (sorry Bear, sorry Lehman you weren't "in"), the rebound happened almost instantly.

And it's not only happening in the United States. In the same period bank shares have broadly outperformed in Europe, too: the DJ EURO STOXX (Banks) index is up 175%, whereas the broader index is up 60%. 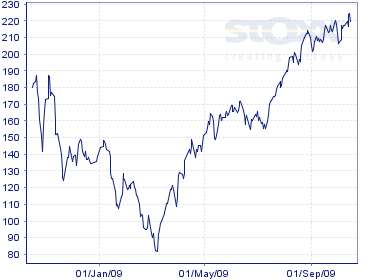 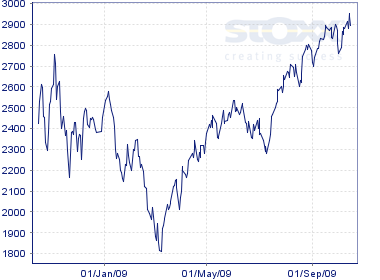 DJ EURO STOXX 50: +60%
Charts: STOXX
Such nearly identical behaviour between American and European markets is not a coincidence, of course. Even though the EU does not possess a common Ministry of Finance (Dept. of Treasury), it does have one European Central Bank. And it is acting just like the Fed - at least as provider of ultra-cheap credit to banks in return for dodgy collateral.

As of last week, the ECB's own balance sheet has grown 50% to 1.8 trillion euro versus 1.2 trillion in the same week in 2007. The entire increase has come from long-term refinancing operations (i.e. term lending to banks against collateral) and "other" securities held for its own account.

Henry Kissinger is no dummy, whatever you may think of his politics and career. He had this to say about China, the US economy and the dollar, during an interview with Le Figaro, France's newspaper "of record". (In my dear friend Debra's honour, I have kept the title of the article in the original French. The rest of the relevant passages I translated into English, with some help from Babel.)

Q. You just returned from Beijing. What is the feeling of those Chinese in government about the international financial crisis, which started in the summer 2008 in the United States?

HK. I will give you my personal opinion, which is only that of an informed observer. I do not speak on behalf of the Obama administration, for which I have much respect, but to which I do not belong. There are always important political divergences between the Chinese and us, the Americans. They are not very serious, they do not threaten peace in the world, but they exist. They are managed by very intense diplomatic relations, by the existence of very many work groups between our two countries.

The Chinese do not trust America to carry out the great political affairs of the planet well. They find that ideology forms too large a part of the way in which Americans conceive international relations. On the other hand, the Chinese, before this financial crisis, regarded us as serious and reliable people in the fields of finance and the economy. They trusted our model and wished even to imitate it. The violence of the crisis, the irresponsibility shown by the great institutions of Wall Street much surprised and shocked the Chinese. We deeply disappointed them.

Today, they have accepted their losses, but they will never again trust us in financial matters. This is the great change. As they are pragmatic people, they understood it was necessary to manage this crisis in co-operation with us, so as to limit the damage to the real economies of our two countries. They take into account that a very large majority of their immense monetary reserves is in dollars and that their exports of consumer goods to America remain vital to the health of their manufacturing industries. The Chinese leaders managed this crisis in co-operation with their American counterparts during the last twelve months, and they will continue to do it. But nothing will be like before.

Q. You alluded to the fact that the director of the central bank of China declared, at the beginning of this year, that the dollar could not continue to be the world's reserve currency, and that the world should seek to create another standard, applying the model of the SDR (Special Drawing Rights ) of the IMF?

Hmmm.. Bob Fisk a couple of weeks ago, now that ultimate realpolitik operator (and original China hand) Henry Kissinger. Anyone think warning rockets are being sent up? Eh?
Posted by Hellasious at Monday, October 19, 2009