It's been a while since I looked at the Fed's balance sheet. Here is an update.

The Fed has been supplying a massive amount of credit to the financial system in order to forestall the effects of the credit collapse. Since the end of 2007 credit extended by the Federal Reserve has jumped 136% to $2.2 trillion. 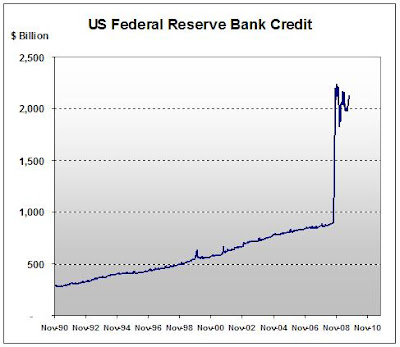 Data: FRB
FRB Credit Up $1.27 Trillion
The Fed has done so by ballooning its own balance sheet, chiefly through the purchase of mortgage-backed securities (MBS), Treasurys and federal agency bonds, plus other direct credit and swap facilities to financial institutions. Here is a comparison of the Fed's major balance sheet assets between the end of September 2009 and a year ago (click to enlarge). 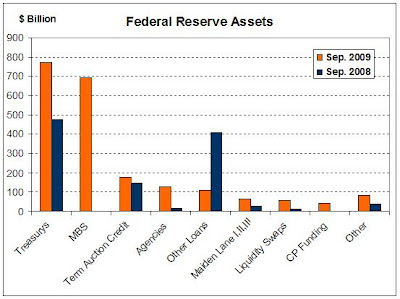 In the one year that the Fed's total assets have increased $640 billion, its own capital has increased by a mere $10 billion, to $51 billion. In other words, the Fed's Asset-to-Capital ratio has gone from 36x to 42x, even as the quality of its assets has demonstrably deteriorated. Mortgages and agencies now make up 40% of its assets, up from a mere 1.1% a year ago.

This massive expansion and radical transformation of the central bank's balance sheet is the direct result of Mr. Bernanke's theory that the Great Depression happened because the Fed did not immediately provide enough liquidity and credit to the financial system in the aftermath of the 1929 Crash. In his view, this eventually precipitated bank failures, the evaporation of depositors' savings and the transformation of a financial crisis into an economic collapse.

I am not going to argue with Mr. Bernanke's eminent academic research; his historical analysis of the 1930's is probably spot on. But I have an increasingly growing suspicion that this analysis - and thus, his current actions - are irrelevant to today's situation; that Mr. Bernanke is a general trying to fight today's war with yesterday's tactics and weapons.

My oft-repeated premise of this reasoning by false analogy, is best exemplified by the French wasting enormous resources to build the Maginot Line before WWII, a superbly constructed and equipped static fortification, only to see it immediately by-passed by Guderian's blitzkrieg panzers in 1940. Why were the French so short-sighted? Because they became mesmerized by their analysis of WWI trench warfare, when millions of their youth were massacred defending or trying to capture ill-equipped trenches. The response to their flawless analysis of the past was, however, entirely irrelevant to their future.

Likewise, there are major differences between today and the 1930's, chief among them:

Table: FRB 2007 Survey
Debt Explosion
I'm afraid that Mr. Bernanke's actions at the Fed end up preserving debt, owed to the top 10% of the population by the other 90% of the people. His measures are not really designed to safeguard the savings of that 90%, simply because they don't exist in any serious amounts.

Maybe Mr. Bernanke can justify his actions as "saving the financial system", but a cynic could easily perceive them as Class Warfare. Because, it is one thing if a private financial institution comes to the rescue of the financial system with its own money, much as J.P. Morgan did in the Panic of 1907. But it is another thing entirely when a public institution bails out a tiny percentage of financiers and mega-rich from a disaster of their own making, and then bills the entire operation to that 90%+ of the people who had nothing to do with it.

Worse than that, worse than being ethically wrong, Mr. Bernanke's actions are also economically useless. Sure, a couple of trillion in ready liquidity has deflected the liquidity crisis, just like couple of aspirin can bring down fever. But fevers and liquidity crises are symptoms, not diseases and the economy's real problem is simply too much debt relative to peoples' income.

Bottom line: Mr. Bernanke is solving nothing by socializing and preserving debt, by substituting bad mortgage debt with federal debt, which we then all have to service and repay.

Instead of ballooning the Fed's balance sheet and engaging in de facto class warfare, Mr. Bernanke should look for ways to reduce families' debt load, most likely through partial forgiveness and default. He can't do that by himself, of course; that's a job for Congress and the President. But, at least, Mr. Bernanke should not make it easy for zombie debt to keep existing and choking American families through the public's enforced largesse. He didn't ask them, did he?
Posted by Hellasious at Thursday, October 08, 2009