Where The Debt Lies (..and Happy Columbus Day Mr. Krugman)

Apropos of Columbus Day and before the main topic, a comment on Mr. Krugman's editorial on monetary policy, appearing in today's NY Times ("Misguided Monetary Mentalities"). Please read it before proceeding.

When Christopher Columbus sailed west from the Old World he was merely trying to discover a faster, more profitable way to reach the well-known trade riches of India and China; he had no notion of America or the New World's vast potential. In other words, he was clueless, if also lucky.

Just like Columbus played it safe with his royal backers and their establishment groupthink, so is Mr. Krugman today calling for known and accepted palliatives for our economy's troubles: more loans, low interest rates, a weaker dollar, more government deficit spending. Not surprisingly, he points his arrows at the Wall Street Journal and selected Federal Reserve members for their sotto voce remarks on raising interest rates, soon.

Well... what if both establishmentarian views are misguided? Should we be following our outdated Neoclassical and Keynesian maps to exit the crisis, or should we strike out in a new direction? Aren't new problems calling for novel solutions? I certainly think so and will soon come back with a post on Green Finance.

Like the oracle of Delphi, today's post title may be interpreted in two ways: the location of debt, or the untruth of debt. In fact, this post is about both. 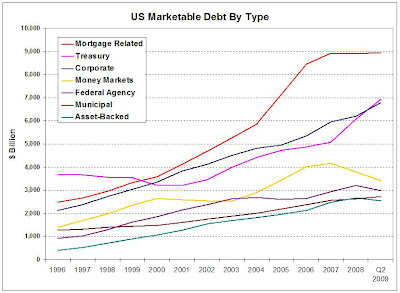 What is happening now is that Treasurys are rushing in to fill the void (a.k.a. socializing losses). 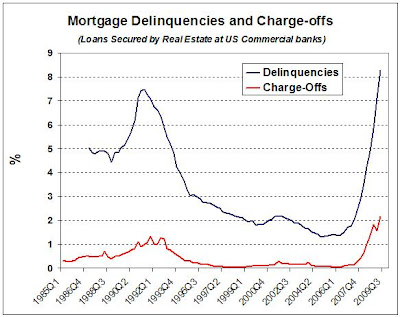 Data: FRB
Since the beginning of 2007 charge-offs for all real estate loans directly held by commercial banks come to a total of 9.5% (adding two years' quarterly rates). One would presume that mortgage lenders held on to the most attractive loans for their own books and securitized the rest, resulting in higher delinquency and charge-off rates for mortgage-related bonds. Indeed, we know that credit default swaps prices (CDS) to insure such securities against default went through the roof. Markit's various ABX indices of mortgage-related CDS collapsed anywhere from 60% to 95% (reverse scale to CDS pricing).

But even if this is not so, even if credit quality is identical between banks' own loans and those they securitized, shouldn't the value of real estate securities at the end of the second quarter 2009 be lower by about 10% to around $8 trillion, at most? And that's just face amount, never mind market value.

Therein, therefore, is where lies the lie on debt, the pretension that all's well in finance balance-sheet land. This "missing void", as it were, has been filled by no one other than the Fed itself, which last year bought $700 billion in mortgage-backed paper for its own account. Coincidence? Of course not...
Posted by Hellasious at Monday, October 12, 2009