About CIT And Sardines

CIT, one the world's largest finance companies specializing in lending to medium-sized companies and equipment leasing, just filed for bankruptcy. It is highly unlikely that American taxpayers are going to recoup any of the $2.33 billion of bailout money the company was provided with in the form of preferred equity.

In the chart below, let's take a look at CIT's balance sheet assets, its equity and the price of its shares - all at year-end except for the last two quarters of 2009 (click to enlarge), and ask ourselves this simple question: what is the probability these assets (mostly loans and leases) were really worth what the annual and quarterly reports said, particularly after 2006?

Judging from the share price: zero probability, of course. 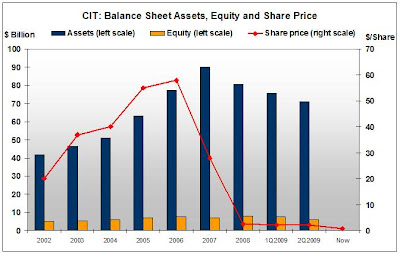 But, this post is not really about CIT. Rather, it is meant as a general comment on financial company balance sheets. To wit, it is nearly impossible to properly value loans, leases and other more esoteric financial assets (e.g. CDO, CDS, IRS, FRA, etc.) when we are out in 3+ sigma territory in delinquencies, defaults, counterparty risk metrics and volatility. One day a company like CIT is supposed to be "worth" $6 billion according to its books, the next it's hyena food.

Andy convinces Billy to buy a can of sardines at a high price by telling him how wonderful they taste. Billy, being greedy, decides to resell them to Charlie for a profit at an even higher price by convincing him, too, about how great these sardines are. The process is repeated several times until the last buyer, let’s call him Zebediah, pays a million bucks to Yorick for a can of the “world’s absolute best sardines – EVER”.

Well, Zebediah decides to open the can and eat the sardines, only to discover they are ordinary, plain sardines. Furious at being swindled, he yells at Yorick: “You crook! You liar! I paid you a million bucks for plain ordinary sardines. They were not the greatest tasting sardines - EVER”, yells Zeb.

“Hey Zebediah, you are such a schmuck. Those were not eating sardines – them were trading sardines!"