Yeah, OK, the Credit Crisis may have abated - at least according to the Sage of Omaha (a.k.a. Warren Buffett, see story here). For example, the spread between BAA and AAA corporate bond interest rates has subsided to a historically reasonable level (see chart below). 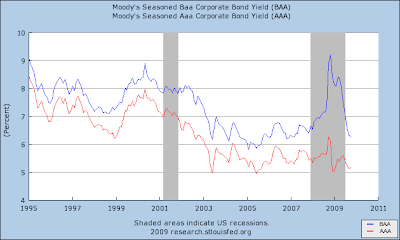 Corporate Bond Spread: BAA - AAA
But unless you are amongst the bankers/traders/speculators who survived the bloodbath and is about to see his or her bonus rise once again, you really don't give a damn. Because for you what really matters is the Real Economic Crisis and the chart that really applies is unemployment (see below).

Oh, the pundits will immediately say, but unemployment is a trailing economic indicator and once things are back to normal it will go down fast. Nothing to worry about...

Oh, really? What if this no longer applies? Today's economy is not characterized by fast-reacting manufacturing with short hiring/firing cycles that accommodate domestic production swings. We have exported this dynamic to China, along with much of our manufacturing base, so we are likely to see a very, very slow recovery in job creation.

And if no jobs are to be had, income will suffer and so will consumer spending, which is the foundation of our entire Permagrowth economy. Yes, there is a chance that we will revert to substituting consumer debt for earned income, as we increasingly did during the Bush II era. But if we do, then we will indeed have learned nothing and soon be responsible for our own demise... again.

Therefore, we should immediately start revamping our economy along Sustainable lines. For a model, perhaps we should start looking at Japan from a different perspective, outside the GDP-metric box. I mean, does anyone think that the Japanese are suffering, or are they enjoying a high living standard after well over a decade of so-called "stagnation"?

Let's bottom-line things: Permagrowth/Permadebt is like the high-wire acrobat who must forever keep moving in order to keep his balance and not plunge to the ground. Likewise, our economic model depends on ever more frantic activity to generate more debt and thus more "money" to service this debt. Debt conservation has replaced human development as the self-evident goal of governments.

If this were only a shocking ethical tragedy we could just shrug our shoulders and quote Cicero: O tempora, o mores! Unfortunately, Permagrowth/Permadebt is also completely antithetical to natural law, the simple truth of energy conservation and the constant increase of entropy.