Tempest In A Tzatziki Pot

Greece has been on the market's ropes for some time now, after it announced a whopping 12.7% budget deficit for 2009, the largest in the eurozone (a year ago the previous government was projecting it around 4%). If Disraeli was alive today, this massive departure from reality-based numbers would have doubtlessly caused him to cry "Lies, damned lies and Greek statistics".

Analysts and the financial press are having a field day with this, dusting off their schoolboy knowledge of all things Greek: "A Greek Tragedy", "Marathon Ahead For Greek Economy", "Greece Enters Plato's Cave"... I bet "Greek Bonds Skewered Into Souvlaki" is the next salvo from the Dumb Title Brigade.

The yields spread of Greek 10-year government bonds over German ones has risen as high as 310 b.p. (3.10%), the highest in nearly 10 years. The five year credit default swap has likewise jumped to 340 points (see chart below). 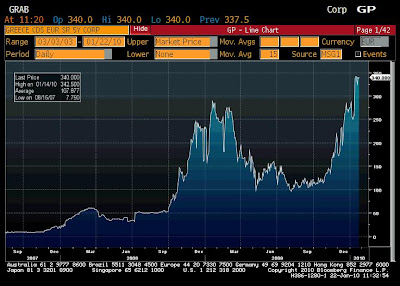 The Greek Problem has now turned into a European Problem, as speculators the world over are turning this debacle into an opportunity to drive the euro lower in the foreign exchange market. The dollar has strengthened from 1.51 to 1.41 vs. the euro in just two months. Moreover, policy and geo-strategy wonks are salivating at the prospect of the eurozone (and then the entire EU) falling apart. All that for a country with a GDP amounting to less that 2% of the entire EU.

There is no question that Greece needs to overhaul its public sector - indeed, its entire economy. But that's a far cry from speculating that it will be the cause of the EU's demise. There's simply too much invested, over too many decades, by the other 98% to let the 2% drag it down. Greece is simply going to be denied permission to default and/or exit the euro zone. Therefore, the whole thing will end up amounting to no more than a tempest in a tzatziki pot.

And what will happen next? After the Greeks have made their grudging obeisance to the All-Mighty Market in the form of mandatory reforms, the EU will bail them out (probably in the form of ECB credit facilities). I expect this in the next few months, even weeks.

P.S. My buddies working at CDS desks are reporting something quite interesting: non-Greek institutions are not accepting Greek names (i.e. Greek banks) as counterparties when the latter are trying to sell CDSs. It does make logical sense (if Greece defaults would you want your Greek bond insurance to be issued by a Greek bank?), but it makes for a very thin and one-way market. My experience says that this is very dangerous ground for those going long Greek CDS, right now.
Posted by Hellasious at Friday, January 22, 2010