Long-time readers of Sudden Debt (it was started on Dec. 2, 2006 with this post) know of my insistence that credit default swaps (CDS) pushed the current financial crisis over the edge of the precipice. This relative newcomer to the roster of financial instruments acted as a catalyst, much as a slow chemical reaction proceeds at explosive levels with the addition of even a tiny amount of the appropriate substance.
I posted many times on CDS, from Phantom Menace to CDS Factors In Equity Valuation (a four-part series: Part A, Part B, Part C, Part D.) and frequently commented on one aspect that made them truly dangerous to the stability of our financial system, i.e. counter-party risk. It didn't matter, I claimed, that a dealer's CDS book was "square", i.e. that he slept comfortably thinking his market risk was zero because he/she had offsetting positions with other dealers.

When I said that huge notional CDS amounts really mattered (see chart below) I was pooh-poohed as a Cassandra, particularly by those professionals who only saw as far as their "blotter" and who never worried what would happen if a major participant went belly-up. 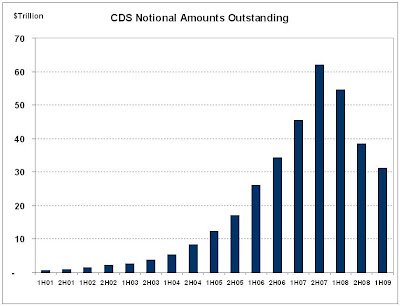 CDS Outstanding (Data: ISDA)
The AIG saga is now unfolding in ways that "professionals" would not even dream of and is snaring past and present Treasury Secretaries who rushed to bail out the failed insurer's counterparties at 100 cents on the dollar, to the tune of $62 billion.

I must admit I made a big mistake three years ago: I thought no American government would ever dare to use such an enormous amount of public money to cover the private losses of the nation's wealthiest institutions. And I am once again amazed at these same institutions' hubris of paying record-breaking bonuses for 2009 results. If this isn't the stuff that makes for public uproar and revolution, I don't know what is...