I will hazard a prediction:  The most likely resolution of the Greek debt crisis is a combination of debt restructuring (haircut plus maturity extensions) and IMF/EU funding for the next 2-3 years.
Before I get accused of becoming a prophet in my old-blog age, I hasten to clarify that this is what the market is already predicting: the 4.60% Greek Government Bond due 9/2040 is currently trading at 68-69 (YTM = 7.20%), i.e. at something less than 70 cents on the dollar.  This is a spread over the nearest equivalent German bonds of 334 basis points.  By contrast, the shorter 6.25% GGB due 2020 is trading at 89-90 (YTM=7.75%), a spread of 467 bp over Bunds. Notes coming due in two to seven years are trading at even wider spreads - see the chart below. 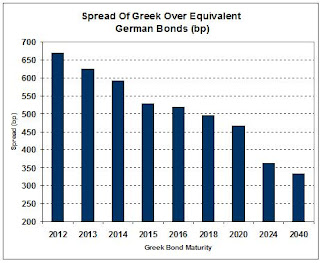 Front-end Of Greek Government Bonds Trading At Much Bigger Spreads Over Germany
I expect, therefore, a voluntary debt swap i.e. swapping bonds coming due over then next 5-10 years for longer maturities, maybe with a self-amortization feature, along with the IMF/EU funding package.  The voluntary feature will likely be there to avoid triggering a credit event under CDS terms, but if structured properly most everyone would want or have to participate - a.k.a. a shotgun marriage.

For example..
Concurrently, the Greek government could enact more revenue-enhancement measures (that's what new taxes  are called, in beffuddle-the-masses speak), probably a real estate ownership tax.  Such a tax could easily raise 5 billion euro/year (current debt service runs at 12-13 billion/yr) and, crucially in a country where tax avoidance is the national sport, would be nearly impossible to avoid.
Take that tax money, segragate it into a special account administered by a Paris Club-type of group, earmark it for the sole benefit of those accepting the debt swap with first-lien bonds  and voila..

The key element in such a deal will be to structure it in such a way as to minimize immediate stress in the balance sheets of major Greek debt holders, i.e. foreign and domestic banks, plus pension funds.  Given the generously stretchy accounting rules for banks holding sovereign debt, it shouldn't be too difficult.

P.S.  I looked at the numbers before I came up with the "..most likely" part of the post's title.  Playing around with the Cumulative Probability of Default (CPD) formula, we can evaluate various scenaria of recovery rates (i.e. how much the "haircut" will be in a potential debt restructuring).  If we assume a generous 80% recovery (20% haircut) current CDS prices of 500 bp indicate a CPD around 60%.  And, in fact, most Greek government bonds already trade around 70-85 cents on the dollar, depending on maturity and coupon.

I don't think Greece will bother to go through a painful debt restructuring process unless it can significantly reduce its debt load, say at least down to 80% of GDP from a projected 120% at the end of 2010.  This implies a haircut of approx. 33% (recovery of 67%).  Plugging in these numbers to the CPD formula (r=67%, CDS=500) we get a 5-year cumulative probability of default of 55%.