April 26, Monday morning update: Greek 5-year CDS reaches 700 pts. (see chart below).  Assuming a 67% recovery, this works out to a cumulative probability of default (CPD) of 67%.  At 80% recovery, CPD rises to 82%.  These are daunting odds, indeed, and mean that Greece will not likely avoid some sort of "credit event".

Two-year Greek government bonds are quoted 86-87 to yield 12.4%, meaning that the bond market is already pricing in a significant part of such an eventuality. 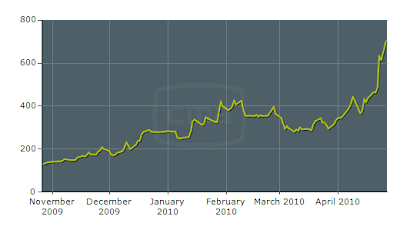 Greece is turning into history's first failed debtopia, an economy that thoroughly eviscerated its production and earned income foundations to replace them with consumer spending on cheap imported goods and asset inflation, both fuelled by massive foreign debt.  Naturally, GDP growth kept zipping ahead for a while, but so what? To arbitrarily extend the ketchup economics of Larry Summers, Greeks shut down all of their tomato-processing factories,  borrowed a ton of foreign money to turn factories and farmland into expensive condos and bought cheap imported ketchup, instead.  Naturally, there were lots of  domestic jobs in home construction at first, but as soon as credit conditions turned sour it was game over.
Greeks no longer make anything that anyone else wants to buy at the price Greeks demand (see chart below), cannot earn enough money to service their debt properly and - quite obviously - cannot maintain a lifestyle that rose to unsustainable levels because of that ever-higher debt.  Furthermore, they cannot devalue their currency to increase competitiveness and inflate their way out of debt.  Their only choice is domestic deflation and even the head of IMF has pointed this out: "The only effective remedy that remains is deflation" he said a few days ago. 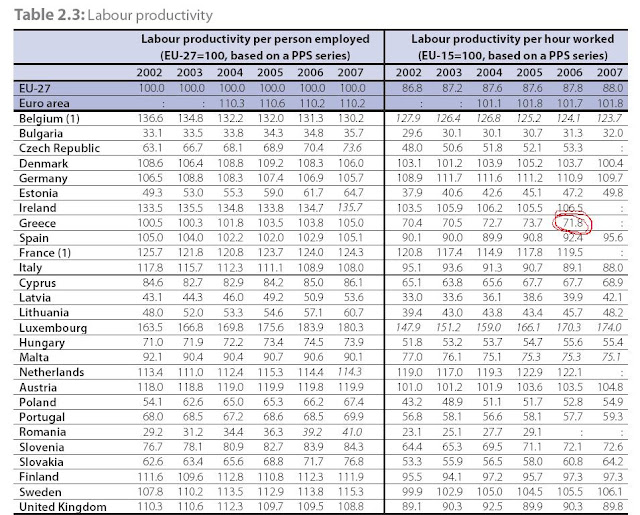 Table: Eurostat 2009 Yearbook
Greek Labour Productivity Extremely Low
Of course, what Mr. Strauss-Kahn means when he says "deflation" is fresh loans in exchange for a reduction in the domestic cost of production, i.e. lowering workers' wages and benefits, plus a healthy dose of deregulation.  In other words, the standard IMF medicine administered many times with dubious results (think Argentina).
Quite apart from the obvious retort of "lower the cost of making what?", since the Greeks no longer make ketchup, I fear that the IMF's plan for Greece will prove an utter failure, at least as it is envisioned right now.  While I agree that deflation is absolutely necessary, since being a member of the eurozone Greece cannot perform a competitive currency devaluation,  I strongly disagree with the type of deflation that is needed.  To wit, I would recommend debt and asset deflation,  to bring fixed costs in line with what the economy can earn.
For example, residential and commercial real estate prices should come down enough so that wages and business earnings may once again comfortably cover its purchase or rent.   Right now they don't,  and by a wide margin (e.g. an apartment in Athens can cost several times more than the average single-family house in the U.S.).  Similarly, the country's total debt load should be reduced - instead of increased with more loans from the EU or IMF - to a level where it can be serviced properly by the real economy.
And as an aside maybe I should point out the debtopic similarities between Greece and the United States?  Ah, but the U.S. has its own currency and can devalue at will, you may retort.  Can it, really?
Posted by Hellasious at Friday, April 23, 2010