Remember how just a few weeks ago Frau Merkel and Monsieur Sarkozy locked horns about bailing out Greece and potentially just about everyone else? (I wonder, who will eventually bail out the bailiffs?) . Well... the pair have now decided to put on a brave show of kiss, kiss, no tell - for the good of their Union, you understand. 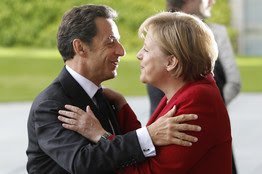 Photo: WSJ
To symbolize their re-found and re-energized affection for each other, the pair have also chosen a song, once very popular during their more.. how shall we put it... salubrious days.
Take it away, maestro...
From Wikipedia:
Je t'aime moi non plus.. "was originally written for and recorded in 1968 with Gainsbourg's then girlfriend, Brigitte Bardot. However, Bardot pleaded with Gainsbourg not to release their recording of the song: she was married at the time, to German businessman Gunter Sachs. Gainsbourg complied.  Later that year, Gainsbourg met, and fell in love with, English actress Jane Birkin, on the set of their film Slogan. "Je t'aime... moi non plus" was re-recorded with Birkin replacing Bardot, and was released early in 1969".
P.S.  For franco-challenged readers, Je t'aime moi non plus translates to I love you ..me neither.   Wink, wink, nudge, nudge, say no more?
Posted by Hellasious at Tuesday, June 15, 2010